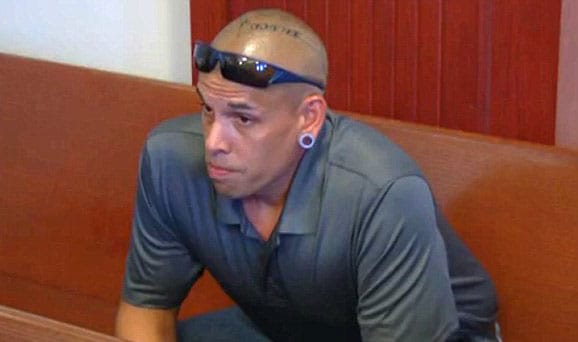 John Ruiz said leaving the gun was a mistake and the entire incident is just a misunderstanding. (Photo credit: KOB 4)

An Albuquerque father is facing child endangerment charges after authorities say he left a loaded handgun with his 11-year-old daughter last weekend while he went to get a tattoo.

According to local media, the girl had gone to the community swimming pool at her apartment complex when one of the neighbors noticed that she had a handgun tucked away under a towel. The girl never threatened anyone or acted in an inappropriate manner. No shots were fired either, but nonetheless, when the neighbor noticed the gun, she called the police.

Authorities interviewed the girl, who apparently told them that her dad, John Ruiz, would leave the gun with her “when he goes to school or runs errands for protection in case someone breaks in or something.” The girl also said that when her dad is home, he usually keeps the .22-caliber handgun either on the counter or under his pillow.

After police spoke with the girl, Ruiz was taken into custody. He has since been released on a $15,000 bond and appeared in court Tuesday, where he was straight-faced and tight-lipped.

Reporters attempted to talk with Ruiz as he walked out of the courtroom, but he initially refused to speak. Eventually, he broke the silence but still had little to say.

“They twisted everything around,” Ruiz said, admitting that he left the firearm unsecured while his daughter was at home, but also admitting that it was a mistake.

“You guys don’t know about harassment or anything else,” he added. “We’re good people, I don’t know what to tell you. I made a mistake, that’s it.”

Ruiz didn’t elaborate on what kind of harassment he was referring to, but did indicate a problem with the neighbors.

Ruiz now faces charges for child endangerment, a third degree felony. If convicted, Ruiz could face up to three years in prison.