Meet the gun-slingin' gals at Shooters Grill in Rifle, Colorado 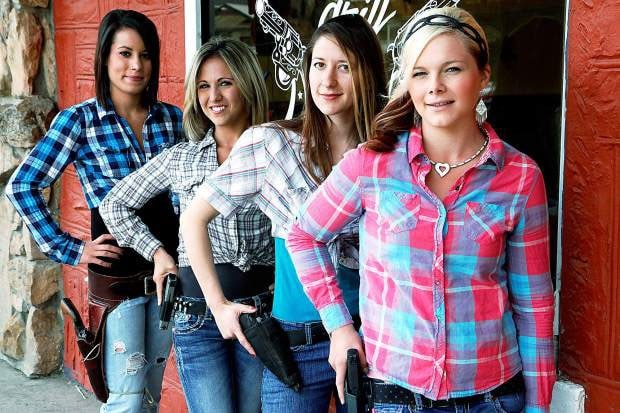 They’re young, they’re cute, they pack heat and serve a great burger to boot. Some customers at Shooters Grill in Rifle, Colorado – yes, Rifle — think the girls’ guns are just part of a costume, but they’re not props, they’re real and the gals know how to use them.

Restaurant owner Lauren Boebert, who opened Shooters just over a year ago with her husband, Jayson, told the Post Independent that the idea is simple: They allow — even encourage — their employees and customers alike to freely exercise their Second Amendment rights.

“We encourage it,” she said. “And the customers love that they can come here and express their rights.”

And it’s not just about the right to carry a firearm either.

“This country was founded on our freedom. People can come in carrying their gun, and they can pray over their food,” said Boebert, who has strong roots in her Christian faith. 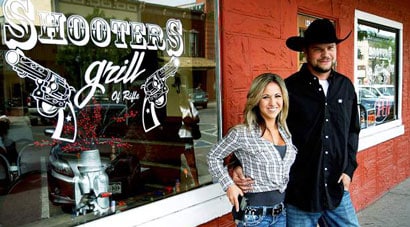 But between the Old West décor and the food with Mexican and American flare, customers barely even seem to notice that the waitresses are packing heat. Those who do, don’t seem to mind anyway.

“We think it’s just fine — we’re very positive about it,” said Wayne Greenwald, who lives in a small town in Michigan but was passing through with his wife when they stopped at Shooters. “We carry guns ourselves and own a rifle, shotgun and handguns. We live in a very small town and we take care of our own crime problems. No one comes to Grand Marais to break into someone’s house.”

In fact, the town of Rifle, which is located a little less than 200 miles west of Denver, never had a bank robbery until May 2011. Additionally, last year they didn’t see a single homicide and only one robbery. The last shooting death in the gun-friendly town was 13 years ago when Michael Steven Stagner, while ranting about immigrants, opened fire on seven Latinos, killing four. Stagner was confined to a mental institution after the courts found him not guilty by reason of insanity.

Even the town’s Police Chief John Dyer is just fine with the setup at Shooters. 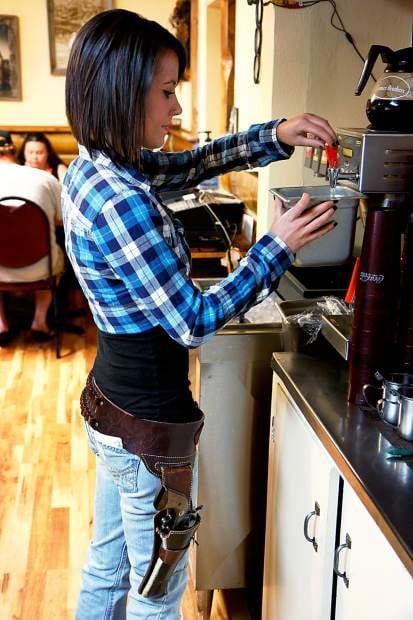 “If it was a bar, I might be saying something different. But I have no problem with it,” Dyer said. “And besides, they make a really good burger.”

There’s no alcohol served at Shooters and the local sheriff said that’s a good thing too.

“Guns and alcohol, just like alcohol and driving, are not a good mix together,” said Garfield County Sheriff Lou Vallario.

Nonetheless, Vallario still stands behind the rights recognized by the Second Amendment.

“I encourage people to get a concealed handgun permit,” Vallario said. “I think there’s this misunderstanding that we can always be there. But I’ve got about one deputy per 1,000 people. People have the absolute constitutional right to protect themselves.”

And for those who are seeking to obtain a concealed carry permit, Shooters offers the state-mandated training classes needed to get one. The training, which is offered every other month, even comes complete with a meal. Twenty-five people attended the last training and Boebert said they would offer the class monthly if the demand created the need.

Meanwhile, Boebert and her gun-slingin’ gals don’t seem too concerned about crime coming their way either.

“I fear for anyone who tries to rob us,” she said.