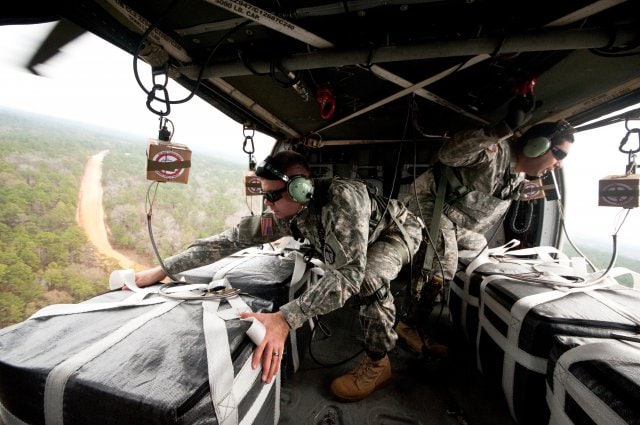 Called the Enhanced Speed Bag, this new airdrop systems standardizes the airdrop system with an engineered speed back that delivers ammo, supplies and equipment with the minimal amount of damage possible.

“The current solution is to fill body bags or duffle bags with resupply items, fly it in low with a helicopter — low as they can — and kick it out the door,” explained Bob Forrester, an ARDEC engineer, in a U.S. Army press release.

“Unfortunately, using this method, many items on the bottom of the bags are destroyed. There is upwards of 40 percent or 50 percent of the resupplies that are not useable. So while the Soldiers get some of the vital stuff they needed — food, water, ammo — a lot of the stuff is damaged.”

“Almost every unit has used their own version of emergency resupply bags,” Forrester said. “They’re all unique, they’re all done ad hoc, it’s not a documented procedure.”

“There’s no certain bag they always order. They’ll use medical bags, storage bags, duffle bags, body bags — the things they have laying around the base.” 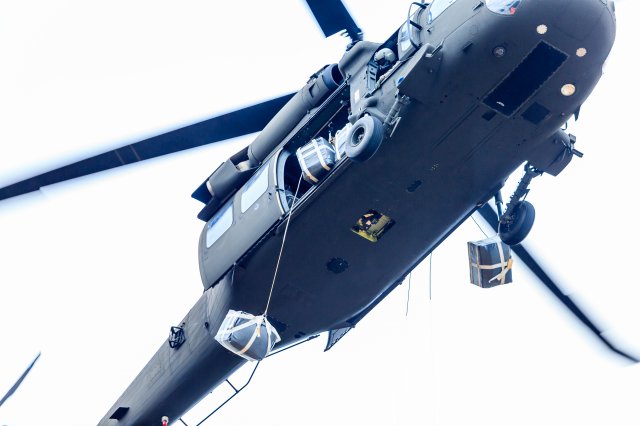 A view from the receiving end. (Photo credit: U.S. Army)

The new Enhanced Speed Bag can has a greater than 90 percent intact delivery rate and can do it from as high as 100 feet off the ground. This not only delivers more supplies safely, it puts distance between supply helicopters and enemy forces, protecting a valuable target in the process.

By establishing a standardized resupply system, it even opens up the door for unmanned helicopter drone-based resupplies.

“You don’t have to land, you don’t have to get close to the ground, you can be 100 feet up,” explained Picatinny contractor Alex Maurer. “It can be automatically released and descends on its own. No one’s in harm’s way, it can fly higher off the ground, it’s a smaller aircraft so it’s harder to hit. It’s an enabler that can make autonomous resupply possible.”

“If we have a standardized way to deliver supplies that aren’t damaged, then you can send troops on missions with less to carry,” added Forrester. “So instead of an emergency resupply this would be a purposeful resupply — daily drops of food, daily drops of water.”

Soldiers can only hike in so much equipment with them into the field and weight-related injuries are some of the most common injuries the military has to deal with. Skirmishes can turn into long firefights. With the new Enhanced Speed Bag soldiers can rely more on successful airdropped resupplies — ammo, food, water and medicine — all potentially life-saving equipment.

“The bag lands padded side down because the rope slows it down just enough to keep it oriented,” said Forrester. “That way you only have to pad one side of the bag, you don’t have to encase it in massive padding.”

Engineers working on the new resupply system have been working with the Army Mountaineering Warfare School and the Georgia National Guard in AFRICOM to test and prove the system. Based on the performance so far, getting a majority of the supplies delivered damage-free can save up to $1,500 worth of gear per drop.