The U.S. Navy made history Tuesday when they promoted the first woman to the rank of four-star admiral.

Michelle Howard is the first female sailor to become a four-star admiral in the Navy’s 236-year history. During the promotion ceremony held at the Women in Military Service for America Memorial at Arlington National Cemetery, Howard talked not about herself, but her fellow servicemen and women, Huffington Post reports.

“Our sailors and Marines are this legacy. They are volunteers,” Howard said. “And with every mission, they demonstrate our core values, values our founders would have understood – courage, honor commitment.” 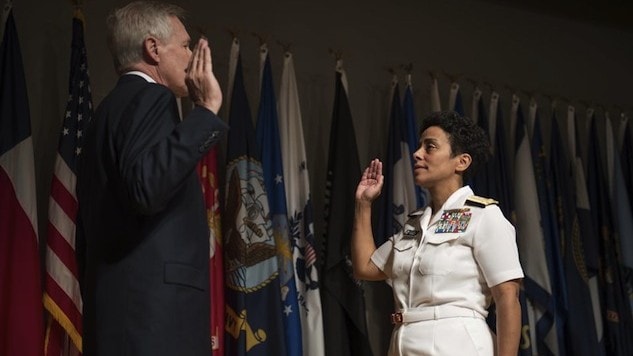 Michelle Howard made history Tuesday when she became the first woman to assume the position of four-star admiral.

But this isn’t the first time Howard has blazed a trail and made history. In 1999, she became the first black woman to command a ship when she took the helm of the Rushmore.

Howard is accustomed to overcoming obstacles in her career and says opportunities for women have increased greatly over the years.

“My perspective is that it’s the opportunities that exist for [women] that is the biggest change [from when I joined],” Howard said. “Now I think about it all these years later, the combat exclusion law was repealed and women can serve on all classes of ships, all types of aircraft. And then the last couple of years, opening up the submarines to women – it’s significant.”

Howard is now the vice chief of naval operations and relieved Adm. Mark Ferguson, who will become the commander of Naval Forces Europe-Africa and Allied Joint Forces Command in Naples, Italy.