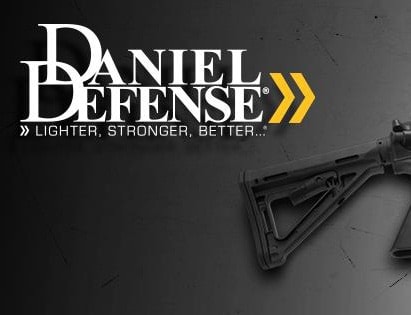 The trademarked slogan and symbol in question.

Daniel Defense will leave it up to the court to decide which company is “Lighter. Stronger. Better.”

The company filed suit against Remington Outdoor Company, the parent company of DPMS Firearms/Panther Arms, on June 24 for using trademarked materials in online and print advertisements, and on trade show signage.

According to court documents, Daniel Defense “has continuously and exclusively used ‘Lighter. Stronger. Better…’ as a trademark in interstate commerce in connection with firearm components and firearms accessories” since 2006.

Also, the Georgia-based company has used the two chevrons pointing to the right in its ads since 2012 and had it registered as a federal trademark in January 2014.

Daniel Defense is so proud of the slogan that it’s even on cups.

On its website, DPMS Firearms/Panther Arms describes its products as “Lighter, stronger, and even more badass” and “Lighter, stronger and every bit as accurate as the original” and pairs it with two chevrons pointing down.

In addition to direct language, the companies also use the dominate portion of the trademarked phrase, “Smaller. Lighter. Stronger.”, paired with two chevrons pointing to the left in advertisements elsewhere.

Daniel Defense is demanding a trial by jury, and is asking for the companies to remove the infringements and pay a sum deemed justly by the court.

Remington, formerly Freedom Group, is based out of North Carolina, and is the parent company for numerous other gun and gun accessory companies. DPMS Firearms/Panther Arms is based out of Minnesota.

DPMS Firearms/Panther Arms and Remington have 30 days, or until July 24, to respond to the complaint.