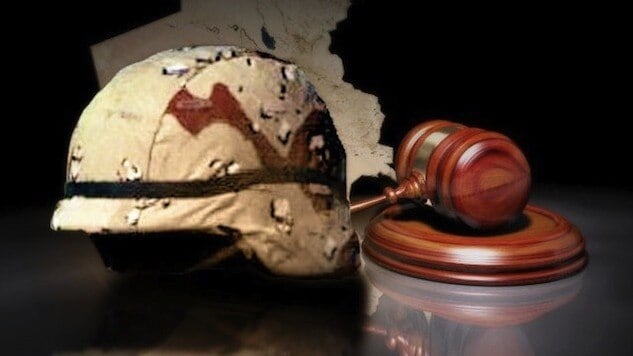 Marine Cpl. Andie Arado faces up to seven years in prison for kissing a woman at a house party while she slept.

Marine Cpl. Andie Arado, 32, faces general court-martial and up to seven years in prison for kissing a woman on the mouth, or what some are calling sexual assault, while at a house party in South Carolina last year.

The incident took place in July 2013 while Arado was a guest at the party. The woman who was hosting said she had gone to bed early, and that when she woke up, Arado was kissing her. She claims Arado left after her husband called out for her from another room, Military Times reports.

But Arado, who is also married, said he never kissed the victim and was only in her room because he was unfamiliar with the house and was looking for a bathroom.

The victim claimed she was pretending to be asleep during the incident and therefore never opened her eyes. And since the victim declined to participate in the investigation, investigating officers recommended Arado be charged with assault and tried at the special court-martial.

“She states that Cpl. Arado made no physical contact, of any kind or nature, with any of her other body parts … this important fact may reasonably lead the members to not find that a sexual offense occurred,” an investigator wrote. “As [the alleged victim] declined to participate in the investigation, I was unable to evaluate her demeanor or credibility or receive any further sworn testimony to substantiate this charge … For these reasons, and in the interest of justice and discipline, I recommend withdrawing and dismissing [the sexual assault charge].”

However, the commanding officer supervising the case stepped in and opted to prosecute Arado for sexual assault and try him at general court-martial instead, something normally only reserved for more serious charges.

Arado’s attorney, Gerald Healy, says the decision to charge for sexual assault is unfair and was made only as a result of pressure from a politically charged climate surrounding military sexual assault.

Arado’s court-martial is scheduled to begin in September.