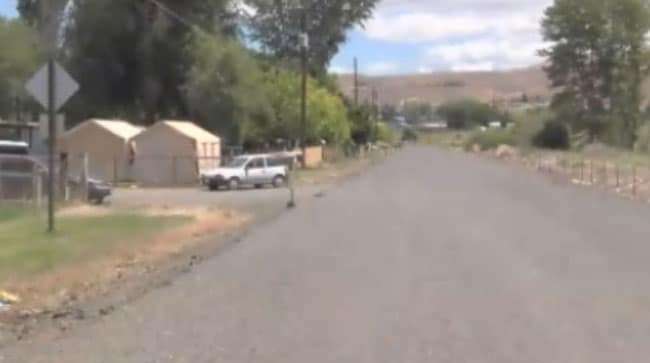 One neighbor said there were children playing in the street when the shots rang out. (Photo credit: KIMA TV)

A weekend party outside of a home in Selah, Washington, Saturday night turned awry when one of the guests was shot after threatening another man who was armed.

Local media reported that the incident took place around 9 p.m. Apparently a 28-year-old man from Yakima was at the party and became agitated and attempted to pick fights with others at the party. For an unknown reason, he then turned his attention towards one guest in particular. He threatened that man, declaring that he was going to shoot him.

The 28-year-old, whose name has not been released, then went to his car and retrieved a handgun. But when he returned to meet his adversary and pointed the gun at him, the second man raised a gun of his own and shot the 28-year-old three times.

The police were called and the 28-year-old was taken to a local hospital where he underwent surgery. At the latest update he was said to be in stable condition and expected to survive.

The second man, whose name has not been released, is not facing any charges at this time.

Authorities confirmed that the man who fired the shots has a valid concealed pistol permit. There was also one report that the 28-year-old also had a permit, but this has not been confirmed by law enforcement.

Evidently alcohol was involved in the dispute. It’s unknown if the two men involved were previously acquainted or what the argument was about.

Nearby neighbors tell reporters that the area isn’t exactly a safe one and that questionable activities – even shootings – aren’t all that uncommon.

One neighbor, who wanted to remain anonymous, said most people in the area have guard dogs to keep people from unlawfully entering their homes.

He said there were kids playing outside when the shots rang out, but the the dad did the best he could to protect to the children.

“He put them in the house as fast as he can because he might’ve shot someone,” the man said.

Fortunately, other than the 28-year-old, nobody was injured during the altercation.