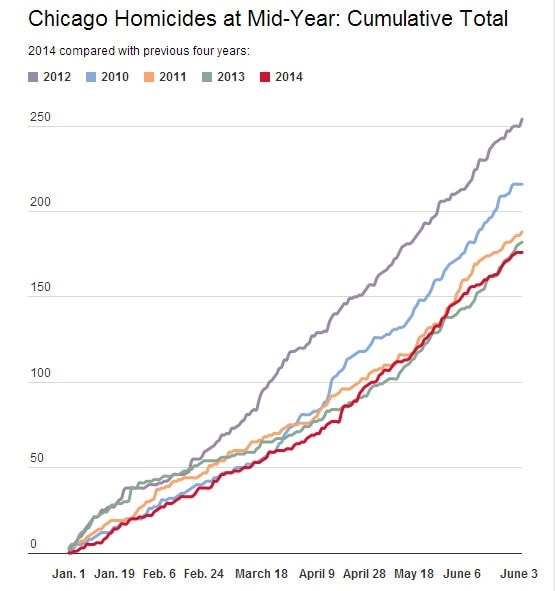 Despite yet another violence-filled weekend in the Windy City, statistics released from the police department last week suggest that while shootings are on the rise in Chicago, homicides are actually down for the first half of 2014, the Associated Press reports.

Over the Independence Day weekend, from Friday to Sunday, Chicago saw at least 50 people shot, seven fatally, bringing the total tally for the year so far to 1,129 shooting victims in the city – an 8 percent increase from this time last year. Over this same weekend last year, more than 70 were shot, 12 fatally.

Yet even as astounding as those numbers are, there still remains a positive side — the city reports a 5 percent decrease in murders, the fewest in the first half of the year for more than 50 years.

Nonetheless, there are some communities within the city that are more plagued with violence than others, and those cities have been part of the focus in an attempt to reduce the ever-growing violence.

Those resources include not only additional law enforcement, but social services as well, Tracy said. 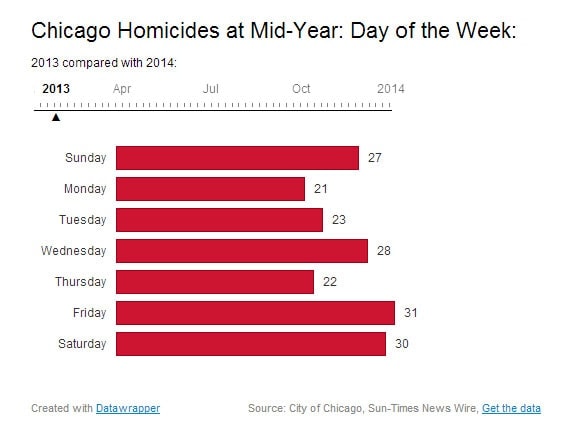 “We will keep building on our strategy, putting more officers on the street in summer months, proactively intervening in gang conflicts, partnering with community leaders,” Police Superintendent Garry McCarthy said in a statement.

And Tracy seems optimistic that brighter days lie ahead for the violence-plagued city.

“We are up against a historical year [in terms of decline] from last year … it’s how we are trending long term as far as where we are going in Chicago,” he said.

“There are so may different things contributing that we might never be able to see which is driving the results, and we are okay with that,” added Evelyn Diaz, commissioner of Chicago’s Department of Family and Support Service. “We think the approach has to be everybody coming at it from different angles. … There is still work to do because there is still areas where we need to see more gains.”

Diaz said the department is working “hand in hand” with law enforcement and also added that she believes the various anti-violence groups throughout the communities are aiding in less killing.

But the violence doesn’t discriminate between locations either. A 17-year-old boy was shot in the back less than two weeks ago just steps from the headquarters of the Rev. Jesse Jackson’s anti-violence group Rainbow PUSH, which also happens to be just around the corner from President Barack Obama’s Chicago home. 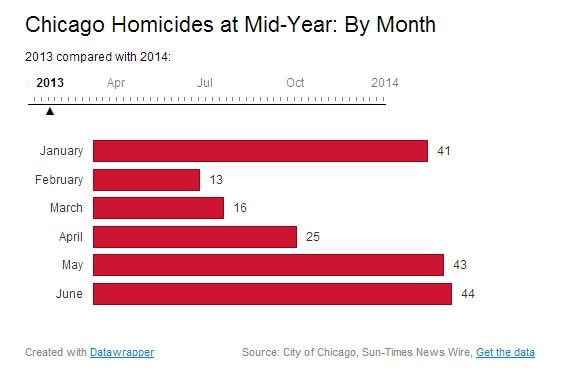 The bullets know no age limit either. Small children have become the victims of violence in the city, more often than not, for simply being in the wrong place at the wrong time. Twenty victims this year have been over the age of 50, including 51-year-old Charles Short, a pastor who was simply walking home from the grocery store to cook dinner when he was shot in the head.

Weekends seem to have more shootings than other days too, although not by much.

Regardless, if the homicide trend does continue to decline – despite the number of shootings actually increasing – maybe this year Chicago will be able to give up the FBI-appointed title of murder capitol of the U.S.