A robber returned an American flag given New York family of a firefighter who killed on Sept. 11 with a note saying, “I am so sorry. I had no idea.”

The robber originally stole the flag from Melissa Brengel’s Huntington Station house early last week, but after discovering its significance the crook gave it back to its rightful owners Thursday with an apology note. 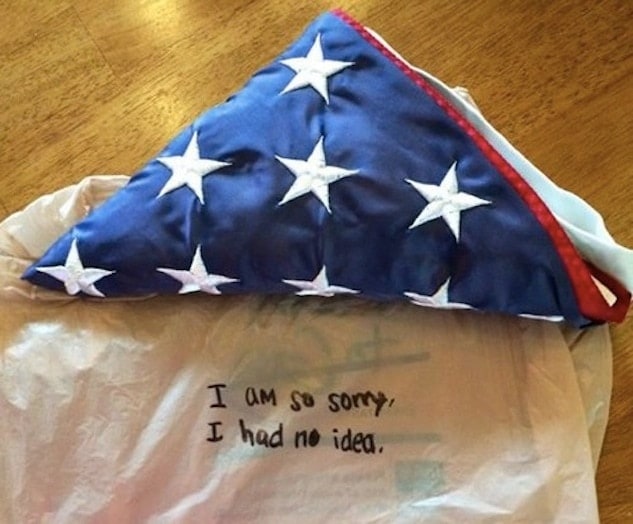 The unknown thief returned the flag with an apology note, “I am so sorry, I had no idea.”

Brengel’s brother, Jonathan Ielpi, was 29 when he died at the World Trade Center. Brengel received the flag from the September 11th Families Association after it had flown over the ruins and often flew it outside her home in honor of her brother.

After it was stolen, Brengel took to local media outlets and social media, pleading that whoever stole the precious item would return it. Several days later, she woke up and found the flag back outside her home.

Brengel wasn’t sure why the flag was stolen in the first place, but said she’s just happy to have it back.

“The flag means so much to me and my family and we are so happy and grateful that it was returned and we are able to display it again, although this time it will be put in a proper case and displayed in the house,” Bregel posted to Facebook. “I don’t know who took it or why. I guess they had their reasons. I am just glad that their conscious got the best of them and they did the right thing by returning it. I also hope it taught them a lesson and they don’t try and pull something like this, with any one, again.”