A Salina, Kansas, man dressed as a Stormtrooper and carrying a plastic blaster prompted a portion of the city to go into lock down Monday.

Christopher Burns, 27, was walking down the street in full “uniform” as part of a Vine Video series he was shooting when Action Travel employee Janelle Snyder and a veteran spotted him carrying what they believed to be an AK-47 rifle, KSAL News reports.

Snyder called the police, who recommended the store lock down.

“Maybe we should call, just make a call,” Snyder said. “Due to the stuff that’s happened out in Colorado at the theater and just weird stuff. If he wouldn’t have had the gun, we wouldn’t have thought about it.” 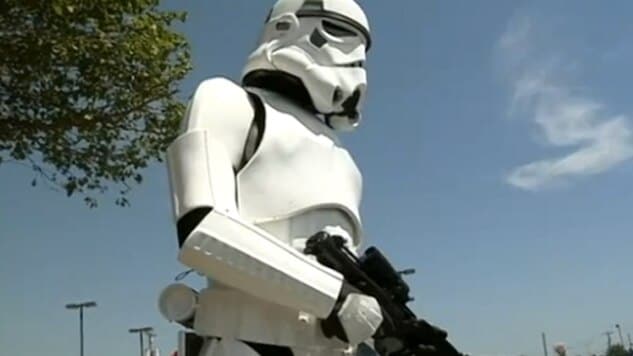 Burns was walking down the street dressed as his Vine Video character ‘Stormtrooper Sam,’ when a local business, fearing he was wielding an AK-47, called the police.

Responding officers contacted Burns and after learning he was making a film, they counseled him on the dangers of walking around in a Stormtrooper costume before letting him go.

Salina Police Capt. Mike Sweeney said technically Burns didn’t do anything illegal, but open carrying a gun, even a plastic one, is “going to draw our attention to find out what you are doing.”

Burns said he was surprised anyone would react with suspicion to such an iconic figure.

“Star Wars is such an iconic image,” Burns said “I was a little surprised that someone would see a Stormtrooper and fear when you know it’s been around since the 70’s.”