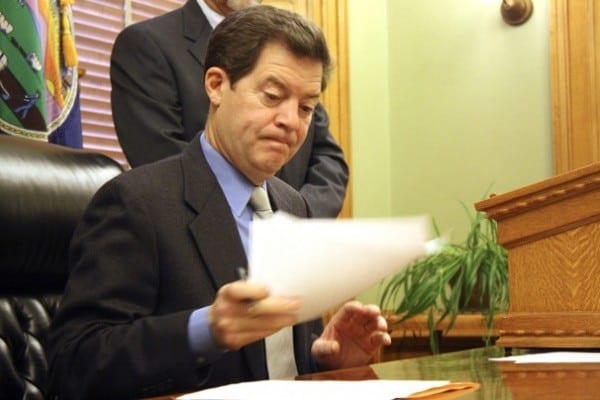 More than a year after its signing, Kansas Gov. Sam Brownback is preparing to defend in court what is called the strictest Second Amendment protection law in the nation.

This news came Monday when the Brady Center to Prevent Gun Violence announced intent to file suit in Federal District Court challenging the law, which, in theory, nullifies Washington’s gun laws in the state.

“The Obama administration attacked this legislation when I signed it more than one year ago,” said Brownback in an official statement Monday.

“It now appears that they have found some Washington DC lawyers to do their bidding,” the Governor continued. “As I have said previously, the right to keep and bear arms is a right that Kansas hold dear. It is a right enshrined not only in the Second Amendment to the United States Constitution, but also protected by the Kansas Bill of Rights.”

The law at the center of the controversy provides state residents protection of their Second Amendment rights by exemption from federal gun control laws, including bans or restrictions on certain guns, magazines or ammunition, for all guns and accessories within the state’s borders.

However, the federal government has already gone on record as disagreeing with the language of the Kansas law. Within days of taking effect in 2013, Attorney Gen. Eric Holder sent Brownback an official letter stating that the legislation directly conflicts with federal law and is therefore unconstitutional.

Further, Holder clarified that, “Under the Supremacy Clause of the United States Constitution, Kansas may not prevent ­federal employees and officials from carrying out their official responsibilities.”

This led Kansas Attorney General Derek Schmidt to build a $225,000 war chest funded by the state legislature to fight anticipated legal challenges to the contested law.

While Washington has not as of yet taken action against the Sunflower state, a similar 2009 measure in Montana has been winding its way through the courts, where judges have contended that federal regulatory gun laws preempt those of states.

This, however, has not stopped nearly 20 states to propose similar legislation in the past several years.

Details of the Brady’s Kansas lawsuit are to be announced Wednesday. To which, Brownback promises, “We will vigorously defend the rights of Kansans in this litigation.”