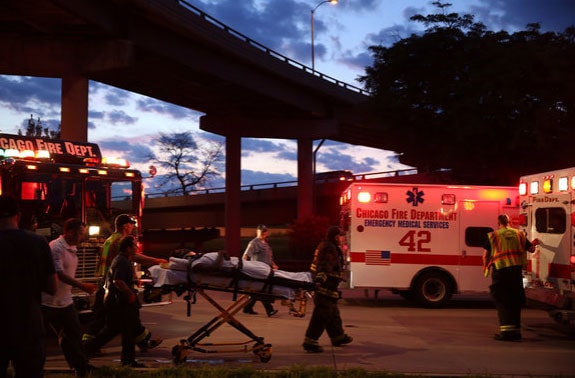 As Chicago experienced one of its most bloody weekends yet, at least of the shootings appeared to be in self-defense. (Photo credit: Chicago Tribune)

They say that alcohol and guns don’t ever mix and an incident at a weekend party in Chicago’s West Pullman proved just that.

One man remains in the hospital after he was shot by a military veteran with a concealed carry permit after the man opened fire into a crowd of people – all over a cup of booze.

Four people, including the veteran, were leaving a party Friday night when one of the women noticed a cup of alcohol sitting on top of her car. According to the Chicago Tribune, the woman asked around, inquiring to whom the cup belonged. Nobody came forward to claim the cup, so the woman simply went to remove it before driving away.

At that point, 22-year-old Denzel A. Mickiel began shouting obscenities and threatening the woman and her friends as he advanced towards her. He then went back into the house, but returned – with a gun.

Mickiel, along with two unidentified suspects, began firing into the group. That’s when the military vet sprang into action.

The veteran took cover behind the front fender of the woman’s car and fired two shots at Mickiel, striking him both times.

The group of victims were able to escape in two separate vehicles, with the two unidentified shooters continuing to fire on them.

Mickiel, who was identified by witnesses as the original shooter, was transported to a local hospital where he remains in critical condition. If he survives, he will face charges for attempted murder. He was not able to appear in court Sunday, but the court still ordered him to be held on a $950,000 bond.

One woman was injured during the incident when Mickiel struck her in the arm and back. She was said to be stabilized, but her current condition is unknown.

Although authorities have not made mention of it, the military veteran is unlikely to face any charges.

Certainly being shot at would qualify as perceived imminent death or great bodily harm.