Illinois sued by nearly 200 who have been denied carry permits 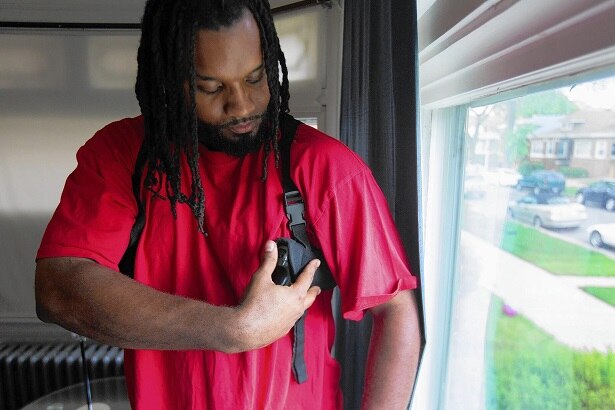 Illinois concealed carry applicant Michael Thomas is on of nearly 200 in the state suing over denials, stating, “I have never been arrested or convicted of any offense, either misdemeanor or felony, in the state of Illinois or any other state. I have no criminal record of any type.” (Photo credit: Alex Garcia/Chicago Tribune)

Following rejection of more than 800 applications for the state’s new concealed carry permits, many in Illinois are turning to the courts for relief.

According to a report from the Chicago Tribune, the state police has received 79,207 applications and issued 62,258 licenses since the Land of Lincoln became the last state in the Union to adopt a concealed carry permitting system.

Of these, some 809 have been denied, following objections from local law enforcement, by the state Concealed Carry Licensing Review Board. Nearly 200 of these would-be permit holders are appealing their denials in court, often with the backing of gun rights groups.

“Citizens of Illinois are being stripped of their right to carry without any knowledge as to why or any opportunity to present evidence,” David Thompson, an attorney representing several plaintiffs on behalf of Illinois Carry, told the Illinois Times.

The group has been collecting information on those who have been denied permits, and has been working with the state’s National Rifle Association affiliate to pursue the matter further through the courts.

In appealing a denial, permit candidates have a strict 60-day window to file a request with the state for reconsideration. If denied, the applicant can ask for a formal administrative hearing in front of a judge to plead their case.

However, this is seen by many as being a kangaroo court, and that applicants have been denied due process.

“The problem is, you go to court and you’re not allowed to present any evidence,” said Thompson. “Even if they did tell you (why you were denied), or you could guess, you have no opportunity to offer evidence in that court proceeding.”

With the perceived secrecy of the review board’s decision, many in the state have moved to take their fight for a permit to higher courts.

One of these cases involves Michael Thomas, an Air Force veteran with no criminal record, who was denied by the board this spring. When Thomas wrote the state police to find out the reason for his denial, he was told that the board was not obligated to disclose its findings. This led Thomas to join in the flood of lawsuits in recent weeks, which has added to the more than $800 already invested in his quest to obtain a permit.

Many of the rejected applicants, such as 69-year old John Berron, already have valid firearms owner’s identification cards which require extensive background checks. Berron, who admittedly has a history that includes a handful of misdemeanor charges, is likewise suing the state police and the licensing board in federal court.

The board’s tactics, and the resulting litigation, also is drawing criticism from state politicians.

“The problem is that we gave the review board the benefit of the doubt, and we didn’t give them any rules to operate by,” said state Rep. Brandon Phelps (D) to the Tribune. “Right now, they are too secretive, and that’s not the way we wanted it.”

Meanwhile the state police are improving their application process to include a new method of filing for a permit largely over the phone. Nevertheless, with the same board review process, it is likely that lines in attorney’s offices around the state will continue to ring as well.