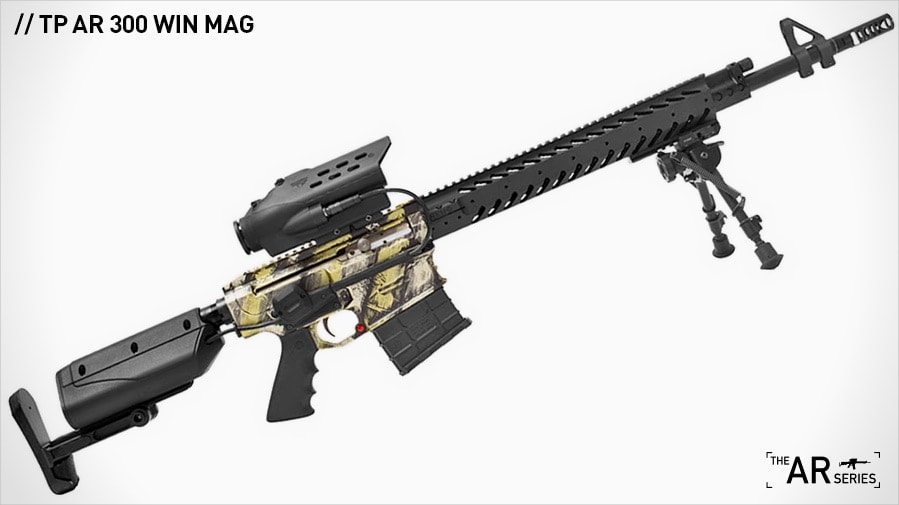 TrackingPoint, the company synonymous with “smart scopes,” is taking pre-orders for a limited-edition run of semi-automatic AR-style rifles chambered for .300 Winchester Magnum.

Only 100 of these rifles will be made and for a limited audience. “TrackingPoint, the company synonymous with “smart scopes,” is taking pre-orders for a limited run of semi-auto AR-style rifles chambered for .300 Win. Mag.,” the company explains.

This batch of rifles is priced a little lower than their flagship rifles and a little higher than their AR series at $18,995. This is an introductory price, if TrackingPoint makes the .300 Winchester Magnum TP AR a standard offering it will be priced a bit higher. Pre-orders will ship in January 2015.

In case you haven’t already pegged it, the .300 Win. Mag. TP AR is built on a Nemo Arms Omen rifle that has been upgraded to work with TrackingPoint’s smart scope system. This particular scope has a range of 850 yards in TTX — “Tag, Track, Xact” — mode.

Like other TP rifles, the .300 Win. Mag. is optimized to work by tagging a target through the scope. The tagging process locks the target in and determines its distance. The scope tracks the target using sophisticated optical recognition while the shooter re-acquires it through the viewfinder that is automatically adjusted for bullet drop, windage, cant, and every other flight plan-altering element, including any motion imparted to the rifle by the shooter, and only lets the perfect shot fly.

In TTX mode, the user pulls the trigger, and only when everything lines up perfectly, is the shot fired. This doesn’t take away control from the shooter, it only enhances them. The system’s default mode is standard, like any other powered scope, with a lit reticle and regular control over the trigger.

The rifle is built on a set of 7075-T6 aluminum receivers with a custom hard-anodized finish and a 22-inch bull barrel. The barrel is fit with a tracking device that allows the scope to compensate for thermal expansion and other barrel-affecting properties to ensure that shot after shot, the rifle stays on target, even when it’s hot.

While TrackingPoint has not released all of the specifications of the .300 Win. Mag. TP AR we expect them to be close to the standard Nemo Arms Omen, with its nickel-boron bolt carrier group and barrel extension, custom free-floating handguard and adjustable gas block.

Including the smart scope and battery pack stock the .300 Win. Mag. TP AR is sure to weigh a few pounds more — a stock Omen weighs about 11 pounds — but that’s a small price to pay for one of the most accurate .300 Win. Mag. rifles in existence.

If you’re not eligible to purchase a .300 Win. Mag. TP AR yet but are thinking about picking up a pair of rifles head over to the TrackingPoint website. AR model rifles start at $9,950.

For a bit less you can get behind a Nemo Arms Omen sans smart scope package if you’re willing to do the heavy lifting when it comes to the precision business starting around $5,000. For more about this singular rifle check out the Nemo Arms website.