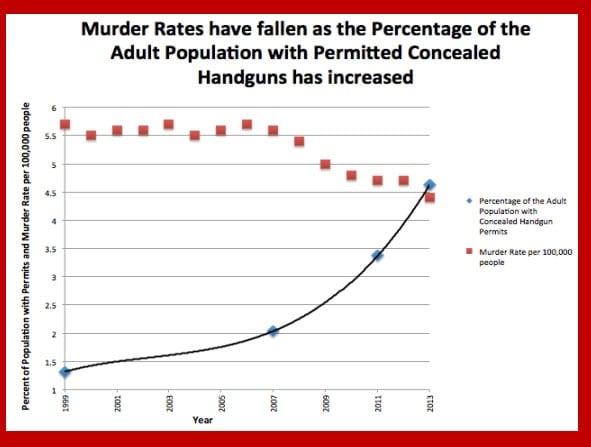 A report released Wednesday by the  Crime Prevention Research Center claims that while the number of concealed carry permits issued across the country has steadily increased, the number of murders and other violent crimes have decreased.

According to Concealed Carry Permit Holders Across the United States, there are more than 11 million people in the U.S. who currently hold a valid concealed carry permit. However, this number likely does not accurately reflect the actual number of people who carry a firearm on a daily basis because not all states make information on permit holders available and not all states even require a permit or license to legally carry a firearm.

At the other end of the spectrum, of the states that require a permit to carry concealed, Hawaii holds the fewest with only 183 permits issued in the entire state, which represents 0.02 percent of the state’s population. The same percentage of the population holds permits in New Jersey.

Furthermore, as concealed carry permits have increased, murder rates have fallen, the study found. According to statistics from 2007 through preliminary estimates for 2013, there has been a 22 percent decrease in murders, as well as a 22 percent drop in overall violent crime across the country.

“When you allow people to carry concealed handguns, you see changes in the behavior of criminals,” said John R. Lott, president of the Crime Prevention Research Center and author of More Guns, Less Crime. “Some criminals stop committing crimes, others move on to crimes in which they don’t come into contact with victims and others actually move to areas where they have less fear of being confronted by armed victims.”

While Lott asserts, “We found that the size of the drop [in crime] is directly related to the percentage of the population with permits,” not everyone agrees.

Todd Burke, former law enforcement officer and professor of criminal justice at Radford University, credits other factors, such as smarter policing and more jail time for violent criminals, for the decrease in crime.

“I think we have to be cautious about having a causal relationship between gun permits and a decrease in crime,” Burke said. “[Lott’s] theory is one to consider, but not to the exclusion of others.”