From the comics to the world: The Cold Harbor Special Projects Group SOPMOD carbine 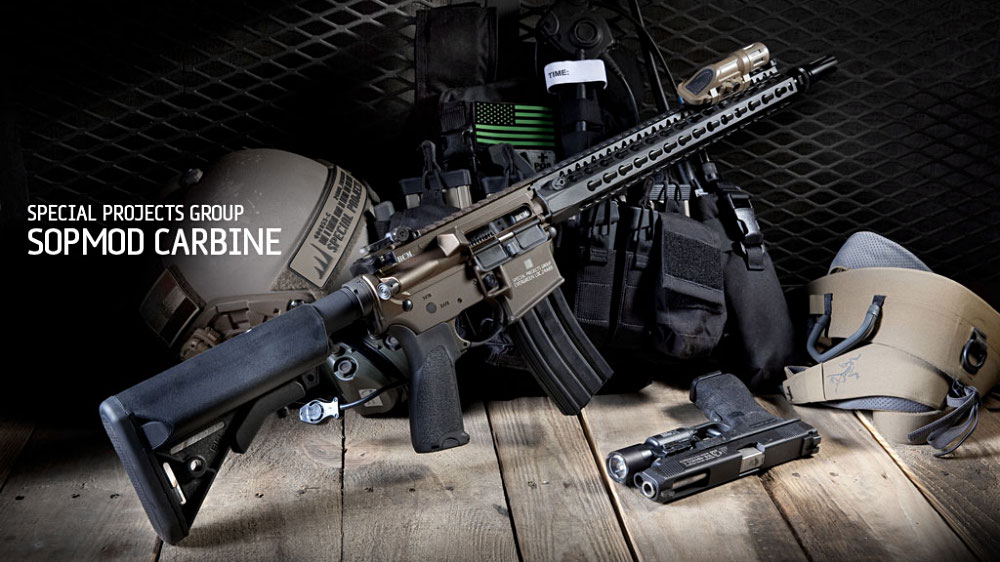 Black Powder Red Earth, Joint Force Enterprises and Bravo Company Manufacturing have teamed together to make one of the most tricked-out AR-15s we’ve come across in a long time. And while it’s got a lot of kit thrown in, none of it is over the top, flashy or tacky. It’s a high-end, no-nonsense rifle that’s ready for anything.

The Cold Harbor Special Projects Group SOPMOD carbine does not come up short when it comes to quality parts, including components by B5 Systems, Geissele Automatics, Knights Armament, Advanced Armament, Haley Strategic and Vltor.

Not bad for a bunch of comic book men.

“Black Powder Red Earth” is also a series of graphic novels that follows private military contractors in a near-future Iraq that has shattered apart through civil conflict. Cold Harbor is the name of the fictional American military corporation on the other side of a clandestine battle to secure Saudi interests in a cloak-and-dagger war.

So much trick… (Photo credit: BPRE)

Turns out, these Cold Harbor dudes have some pretty bad-ass rifles. The CH SOPMOD carbine was developed with input from the same vets brought in to consult on the Black Powder novels and online role-playing game. Built around a 14.5-inch hammer-forged BCM barrel with a permanently attached Advanced Armament Corp. 51T flash hider and 1-in-7 inch twist, this carbine is as compact at an M4 without any NFA paperwork.

The similarities to the M4 pretty much end there. The rifle sports a good amount of Bravo Company hardware including a BCM ambidextrous charging handle, BCM GunFighter Grip Mod 3, BCM Enhanced Trigger Guard and BCM KeyMod quick-detach sling point. The bolt carrier group is also by Bravo Company and the trigger is by Geissele Automatics.

Naturally the carbine sports a B5 Systems SOPMOD telescoping stock.

The handguard is by Knights Armament — the KMR-13 KeyMod handguard that reaches all the way out to the end of the barrel. The handguard and flattop upper receiver sport KAC backup micro iron sights, with a 300-meter rear sight.

Set forward on the handguard is a Haley Strategic Partners Inforce WML weapon light on a Thorntail offset mount.

The carbine has a duotone Cerakote finish for a perfectly color-matched set of receivers. The finish is done by Joint Force Enterprises and uses custom blends Dark Bronze for the receivers and Cerakote Cobalt for the handguard. The receivers are laser-engraved with Cold Harbor IDs.

While the roots of this carbine are fiction the gun is anything but. It’s a complete package that only needs ammo and a direction to shoot at. It’s suppressor-ready and comes with one 30-round USGI magazine.

What’s the sticker? $2,299. Honestly it would be difficult to build this rifle for less, given how much has gone into it. And for BPRE fans, this is a dream come true.

Interested? Get all the details about the Cold Harbor SOPMOD carbine here.