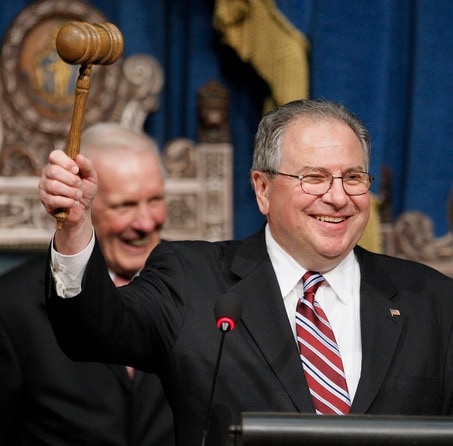 In a 112-38 vote along party lines, the Massachusetts state house approved a bill Wednesday, introduced just the night before, expanding regulation of gun ownership.

The legislation, House Bill 4278, is a watered-down version of a more controversial measure brought to the chamber by state House Speaker Bob DeLeo (D-Winthrop) in May. However, it still proposes expanding the state’s ‘may-issue’ concealed carry policy to cover not only the carry of handguns, but also the ownership of handguns, rifles and shotguns.

“It makes our already strong gun laws even stronger here in Massachusetts,” DeLeo said following the passage of the measure late Wednesday night. “But I think it also sends a message throughout every state and most importantly to the folks in Washington, that gun-control measures can earn bipartisan support.”

A single Republican, Rep. George Peterson (R-Grafton), crossed the aisle and joined house Democrats in voting for the bill, which had just been distributed Tuesday night from committee. As a result, lawmakers had just 16 hours to review the 38-page bill before voting on the legislation.

The bill proposes to strengthen law enforcement discretion over issuing Firearms Identification cards in their jurisdiction. Any purchase of rifles or shotguns in the state requires a valid FID card to proceed. Should a police chief or sheriff decline to issue a card, they would be required to inform the applicant as to the reason and allow an appeal process.

The group had previously been very active in mobilizing public opposition to the earlier and more draconian version of the legislation among gun owners in the state. The primary change to H.4278 over DeLeo’s previous bill was the deletion of a universal background check requirement that would have mandated private gun transfers be conducted through licensed dealers.

“We have been very successful in changing the gun language in this bill,” said Jim Wallace, executive director of GOAL, to The Republican. “GOAL has told the legislature that we are neutral on the bill. We believe this is a victory for the 2nd Amendment in Massachusetts.”

Even with this in mind, the National Rifle Association was quick to condemn the measure. The 5-million strong group took particular exception to the bill’s strengthening of FID card requirements.

“While H.4278 has been significantly improved in many areas, perhaps the bill’s most egregious provision, which gives issuing authorities discretion to deny firearm identification cards, remains in the current version of the House-passed bill,” read a statement issued through the NRA’s Institute for Legislative Action just following passage of the measure.

“While an improvement over prior versions of this bill that would have given essentially unfettered discretion to issuing authorities to deny applicants or renewal applicants, it isn’t difficult to imagine how this provision will be abused if H.4278 becomes law,” the statement said. “For example, a government official with a personal grudge against an applicant or an opposition to individual gun ownership could use almost any ‘bad’ conduct in an applicant’s past to deny the applicant, which might include any number of menial acts that wouldn’t normally prohibit a person from possessing a firearm.”

The measure now proceeds to the state senate providing it is engrossed and, with the current legislative session expiring on soon, must be sent to Gov. Deval Patrick’s desk by July 31.

DeLeo told the State House News Service there is “impetus by all three people” – himself, Patrick, and Senate President Therese Murray – to get a gun bill passed into law by the end of July.