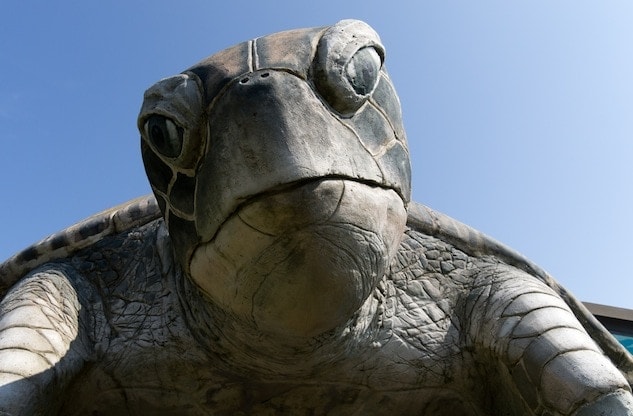 Onegiu shot the tortoise after it became ‘aggresive’ and ‘violent.’

Off-duty police officer Charles Onegiu was sipping a cup of tea in his Nebbi district home when an uninvited tortoise entered. Onegiu tried to scare the creature off with a stick, and then a plastic chair, before ultimately shooting it dead, New Vision reports.

“I tried to scare it but the tortoise became very aggressive. I took a stick to chase it but it instead became more violent,” Onegiu said. “I immediately picked a plastic chair to hit it. It then got out of the hut and moved towards the latrine as people rushed to my rescue.”

The tortoise hid in the bathroom for some time, and when it finally came out, Onegiu was ready.

“When it came out, I reached for my gun and shot it dead. It was a very big white tortoise,” Onegiu said. “As I talk now, I am still scared because it is the first time I have seen such an incident happen in my life, or heard of one.”

“It was a wonderful morning for me after training the crime preventers for the sub-county on the basics of their jobs,” Onegiu continued. “Little did I know that a different chapter awaited me later at home.”

Onegiu’s confrontation with the land-dwelling reptile left a lasting mark on him. He requested time off from work to recover, but after talking with his commander, he decided to stay.

“… He consoled me and advised me to keep on duty,” said Onegiu. “My father also came to talk and console me about the incident, but I’m still scared.”

A local Christian group later prayed for Onegiu before burning the tortoise to ashes.