While the Farmington, Minnesota, based Rychner family has known WWII vet Erling Kindem, 89, for nearly a decade, it wasn’t until last year their 3-year-old son Emmet wandered over to say hello. Emmet, who loves tomatoes, wanted to see Kindem’s outdoor garden, and from there the two formed an inseparable bond, KARE reports. 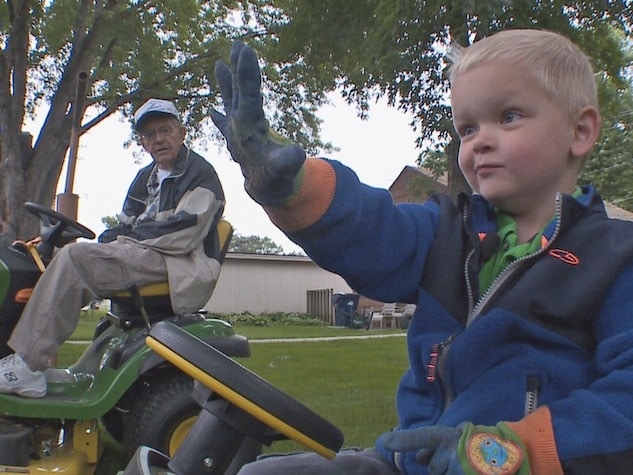 “They kind of bonded over the tomatoes in his garden,” said Emmet’s mother, Anika Rychner, “because Emmett loves tomatoes.”

While there’s an obvious disparity in age, Emmet and Kindem have plenty in common. They both love riding lawnmowers, fixing bikes, and croquet.

“He’s just taught him so much,” said Anika.

“His patience is unbelievable,” said Emmet’s father, Bryan Rychner. “He sees Emmett outside playing, he’ll find a reason to go outside.”

But the Rychner’s recently sold their house and will be leaving Kindem, and his friendship, behind.

“I told him ahead of time there was going to be a ‘for sale’ sign in our yard,” Anika said. “Then I went in the house and I cried for about an hour.”

According to ABC News, the friends may be moving apart, but it won’t be the last time they see each other.

“Erling grew up in Northfield and he goes there every week to meet up with other World War II veterans,” Anika said. “It won’t be the same because we are not living next door to each other anymore, but we are definitely going to let the two reunite when we move.”