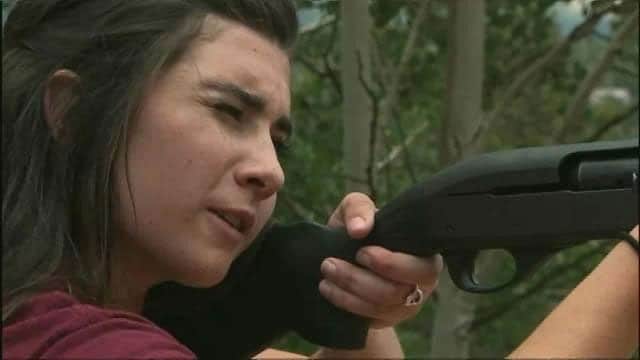 The 15-year-old had her eyes on the prize – a black bear. (Photo credit: Fox)

A Park County, Colo. teen is being hailed a hero after she took action against an angry intruder breaking into her home this week, but when she went up against the unwanted guest, she got a bit of a surprise.

When Rose Hill first heard the commotion in the garage, she assumed it was either someone trying to break in or an animal. As it turned out, it was an animal – a big black bear with an appetite.

“All I heard was just… crazy, like everything was being thrown, hit, messed with, rattled around,” Hill told reporters from a local Fox affiliate. “It was insane.”

Without missing a beat, the 15-year-old grabbed not one, but two shotguns. As she walked outside, her dogs had already ran the bear out of the garage. “I was face-to-face with the bear when my dogs chased it out of the garage through a hole the bear made going after dog food,” she said.

Rose recalled firing one shot at the bear before it reared up and she fired two additional shots, then switching shotguns, as each only had three shots loaded. Rose ended up firing a total of six shots before the bear finally died after rolling over the side of the mountain where her home is located.

And all six shots hit the bear too. As it turns out, Rose is an award-winning competitive shooter. Rose’s mom, Jana, is thankful for her daughter’s sharpshooting skills and proud of the courage and bravery her daughter exhibited when faced with the mighty beast.

“This could’ve been a very bad situation if she wasn’t trained and very comfortable with guns,” said the teen’s mother. “I’m happy it turned out the way it did.”

Even Rose’s brother, who calls her “an overacheiver” and a “cool cat,” is proud of how his sister handled herself.

But Rose admitted that it was still a scary situation.

“If I wouldn’t had my gun, I don’t know what I would have done,” she said.