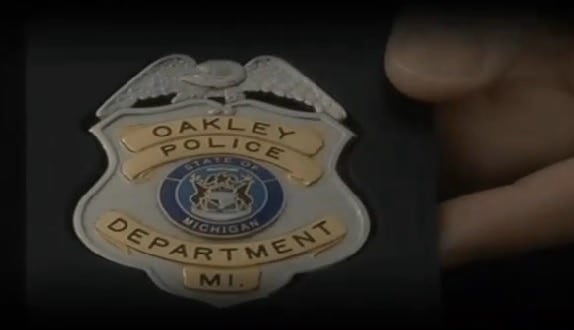 The small town of Oakley has one reserve officer for every three residents. (Photo credit: WNEM)

The small town of Oakley, Mich., with a population of 290, has a force of 100 auxiliary officers who some contend pay for their badges and the pistol free zone exemptions that come with them.

This force of volunteers, many from nearby Detroit, largely self-funds the small town’s police department through personal donations that, according to the Detroit News, come to the tune of more than $38,000 per year. These uniformed part-time officers have police credentials and badges, and must come into the program with a state-issued concealed carry permit, but have no arrest powers.

“It’s a good program. It’s a clean program,” said Chief Robert J. Reznick, who insists the department is complying with all state and local laws. “Anyone who looks at it will tell you it’s a solid program.”

Some argue the primary benefit gained from being one of these reserve police officers is the ability for these individuals to carry firearms in so-called pistol free zones in the state. Under Michigan law, individuals with concealed carry permits are not allowed to carry in a number of areas including schools, childcare centers, taverns, and churches. However, police credentials can often trump this.

The chief is tight lipped over this possibility. “They all have their own reasons for joining,” Reznick said. “A majority of them are givers, wanting to help an impoverished community.”

Nevertheless, a series of lawsuits brought against the city in recent months, some involving reserve officers and gunplay, have led to the Michigan Municipal League canceling Oakley’s insurance policy. One of these suits included requests to disclose the names of the department’s reserve officers that was subsequently denied. One town trustee even called for the department as a whole to be disbanded due to the insurance scandal but a new carrier agreed to underwrite the city effective July 1.

“People have a lot of questions, and for years they have gone unanswered,” Shannon Bitterman, a plaintiff against the department, told MLive. “I’m certainly not the only one in town asking the questions, I’m just the one trying to get the answers.”

Reznick did not immediately return Guns.com’s requests for comment.