As I stepped on to the hallowed grounds of SIG Sauer’s headquarters in Portsmouth, NH, I thought I had the wrong address. A flawless viridian landscape, peppered with business people and bohemian ladies enjoying a no-doubt organic picnic, greeted me. Some business men were enjoying a bottle of water under an immaculately groomed tree, while others rested on blankets. They seemed to be trying to recover from a lunch-time feast or waging a losing battle against the sleep inducing rays of the mid-day sun. 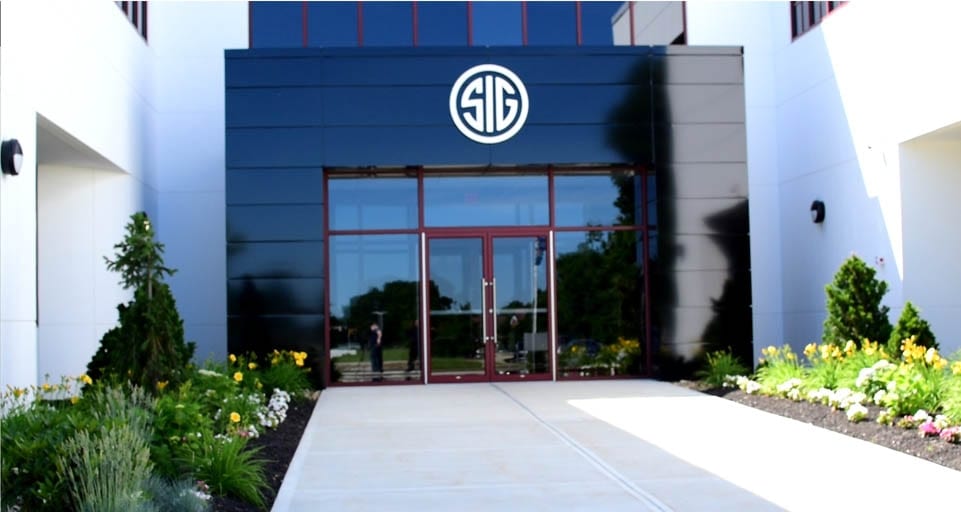 Behind these gates lies my financial ruin; tons of high-end firearms (Photo by Jim Grant)

My gaze rose from the friendly faces towards a sterling white building. I turned around to question the cab driver, thinking he had dropped me off at some new remote campus of Berkeley, tucked away in some sleepy New England town. When I turned around, the cab driver had already left. 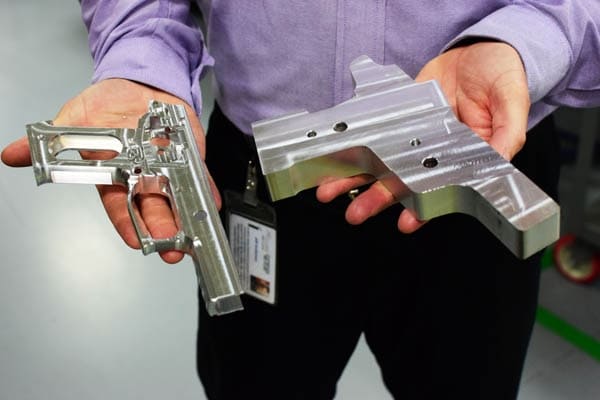 With no other course of action to take, I walked towards the gleaming white structure nodding politely to the bystanders. I inhaled deeply and experienced the freshly manicured lawn infused lightly with the sweet scent of flowers. I must have momentary closed my eyes, because when I opened them I spied the back-lit SIG logo above the mirrored jet-black entrance to the building and breathed a sigh of relief. Once inside, I was welcomed by polished wood and brushed aluminum, lending itself to seem like a sterile future dystopia. Utterly different and totally separate from the picturesque spring day that lead me here. The strict geometric composition of the building’s innards drew my wondering eye to the front desk. 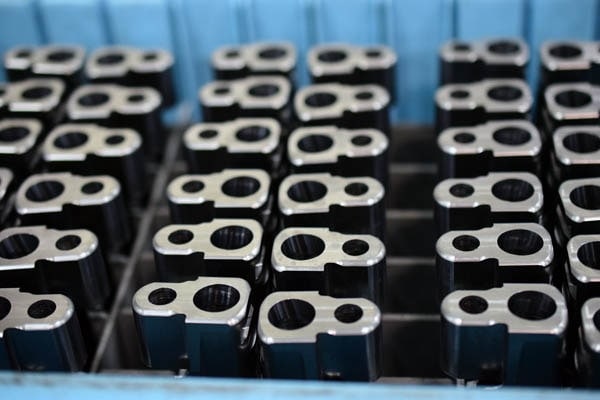 After a few milling operations, the SIG slide are ready to be deburred by hand (Photo by Jim Grant)

If The Empire had a corporate HQ, they should model it after the entrance to SIG Sauer’s plant. It was as mysterious as it was futuristic and given the geometric nature of SIG’s product lines, exceptionally fitting. I was ushered through the facilities, by a pleasant SIG employee, towards a cafeteria where I was reintroduced to the college-campus vibe that had left me at the entrance. The people within were cordial, polite and inviting, some even waved as I passed by. It was a far cry from the gun-maker’s headquarters I imagined.

The parts of the building that I passed through were clean, futuristic and business-like without feeling like a hospital. The only indication that this building dealt with firearms was the occasional SIG Sauer poster and the SIG-branded dining tables (which – SIG if you’re reading this – don’t listen to my wife, I do need one of those in my dinning room and yes it will fit!). The SIG employee sat me down in the cafeteria, where I returned e-mails and anxiously awaited for the factory tour to begin. When the tour commenced, I was lead from the canteen to the factory floor, where the magic happens. 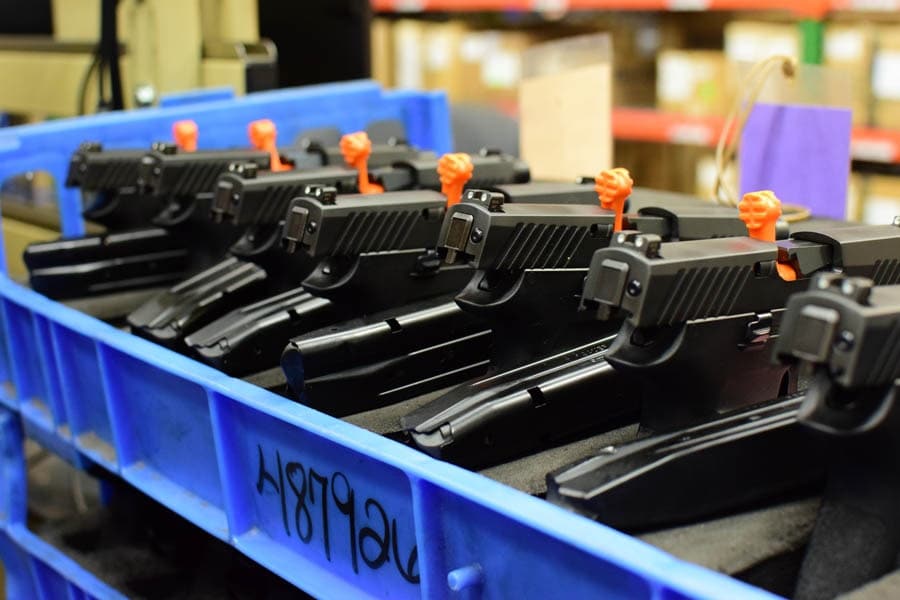 Oh man, look at those beautiful pistols, on their way to some lucky recipient (Photo by Jim Grant)

In one room thousand upon thousands of cardboard boxes stretched as far as the eye could see. Each one stuffed with a pistol, rifle or accessory bound for some lucky recipient’s home. In another, mechanical blades danced to the symphony of whirling mechanical drills and lathes. Hundreds, if not thousands, of AR bolt-carriers and pistol frames were constantly being milled from solid blocks of steel and aluminum. 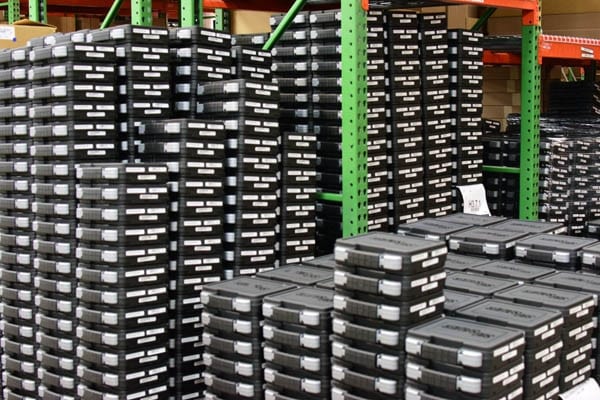 Sweet mother-of-God, someone hide my wallet! (Photo by Jim Grant)

It was like Willy Wonka & the Chocolate Factory, each room held a different wonder, but instead of candy and oompa loompas singing, there were firearms and the sounds of muffled gunfire. Yes, gunfire. SIG’s plant houses a self-sufficient live-fire testing range, located in the center of the compound. As the tour wound its way toward the monolithic structure, seemingly cordoned off from the ever-moving microcosm inside the SIG plant, we came across an incongruous cog in this ultra-modern manufacturing mechanism: people. People with hand-tools, calipers and files. They were slowly and deliberately checking, fitting and deburring every pistol frame that came off the assembly line. Some my view this as archaic and unnecessary, but I found it tremendously comforting. These tools that may one day save someone’s life are carefully fine tuned and treated with the respect they deserve. 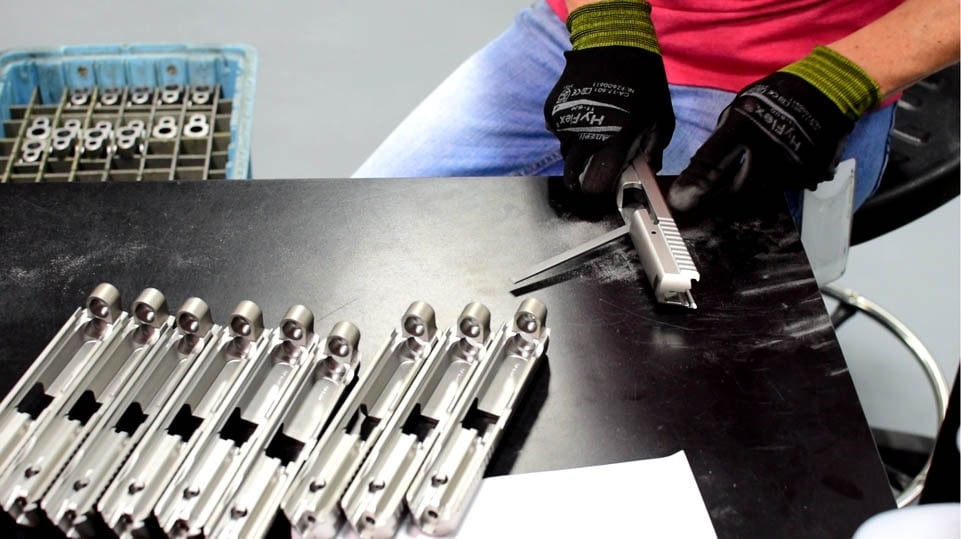 Each SIG handgun receives hand-finishing before it ships. (Photo by Jim Grant)

I found this philanthropic theme repeated throughout the tour. Human beings were present in the live-fire testing range as well. Our tour guide explained that a trained shooter would fire a pistol all day and jot down notes, marking each one as pass or fail under the watchful eye of a central command center, also supervised by people, that monitored the air quality and temperature within. Many, if not all of these systems could be automated, but they weren’t. Machines can’t determine the unquantifiable features of firearm construction and design. The aspects that make a pistol comfortable and easy to shoot, or naturally accurate sometimes require a living, breathing person to evaluate. As we made our way out of the building we stopped in one last location.

One of the coolest rooms I’ve ever encountered. It looked like Batman and James Bond collaborated on a room for the sole purpose of displaying their fondness of SIG Sauer products. Looking at the long oaken meeting table, you would think it was an upscale room used for business meetings. Until you viewed the walls. The walls were lined with opaque glass and soft-white bulbs. The bulbs were used to illuminate the SIG products that coated the walls. Every single SIG pistol, rifle and submachine gun currently made was elegantly displayed. Despite my pleas, the SIG representative did not allow me to play Supermarket Sweep in the large room. 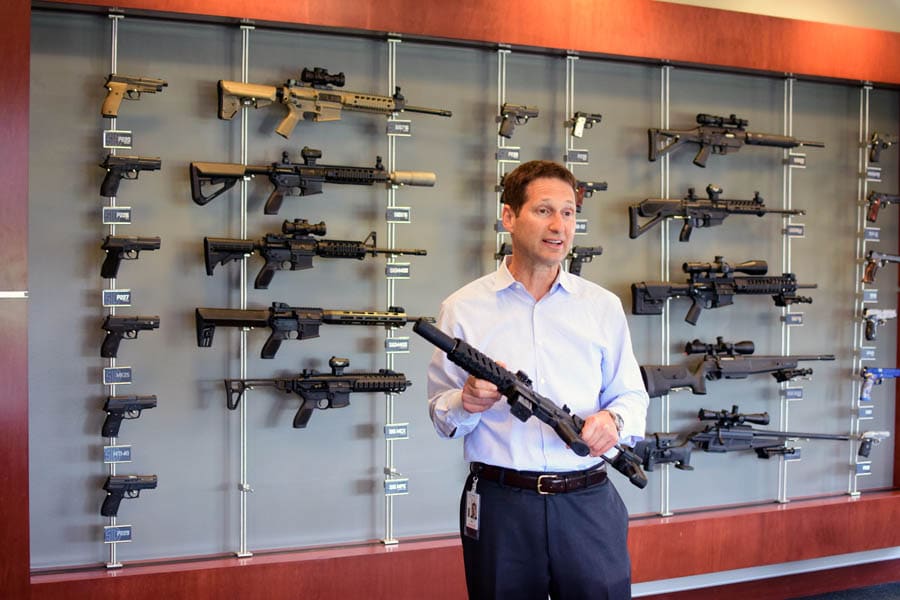 The SIG Sauer factory may seem out of place to non-gun enthusiasts and enthusiast alike, but it represents the shift of gun culture from taboo to common-place. An excellent transformation for gun-lovers like myself. If we reinvent the standard, albeit prejudice, view of gun owners that plagues the majority of society, perhaps, guns would be next. They could be viewed as a common tool, instead of an instrument of destruction. Wouldn’t it be nice if guns were as ubiquitous and unfrightening as kitchen knives? (London notwithstanding)