This is DARPA’s EXACTO system: a bullet that can change its trajectory after it’s been fired.

It’s been in development for a few years now and is based around a highly-specialized .50 BMG load. The projectile is a vaned electronic dart with an optical receiver built into the base of the bullet. Using a laser, a sniper team can control the flight path of the bullet remotely in-flight.

“EXACTO’s specially-designed ammunition and real-time optical guidance system help track and direct projectiles to their targets by compensating for weather, wind, target movement and other factors that could impede successful hits,” reads a recent DARPA release.

This demonstration shows how much control sniping teams have over the trajectory of the bullet. The project is in its second phase and shows a lot of promise.

Unlike smart scope technology, which ensures the best possible shot that can be predicted from the point of the shooter, the EXACTO system uses a standard rifle and optic combined with a secondary guidance system to direct the projectile to its target.

“The system combines a maneuverable bullet and a real-time guidance system to track and deliver the projectile to the target, allowing the bullet to change path during flight to compensate for any unexpected factors that may drive it off course,” explains the EXACTO project page.

This has real advantages, the biggest of all being able to track moving targets. Given the increased flight time of long-range shots, it’s possible for a target to move out of the way in the time it takes for the bullet to close the distance. 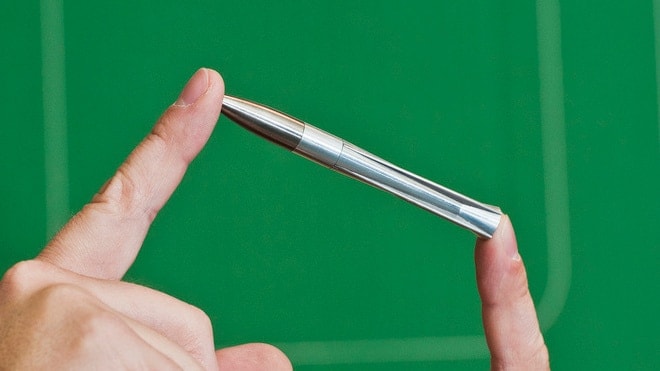 The projectile obviously isn’t like any traditional sniper’s bullet. EXACTO uses a finned dart that’s launched with the help of a sabot. The rear of the dart is an optical sensor that receives information from the guidance system. Using that information, the projectile uses the fins to tweak its flight path aerodynamically.

DARPA says the projectile can make as many as 30 corrections per second, and that their darts are sub-MOA accurate a mile away.

Seeing how much shift this system is capable of correcting for, it also opens up more shooting opportunities for snipers. With EXACTO, it’s possible to take a quick, imperfect shot, or shoot a fast-moving target and make the shot perfect after the fact. This could do for bullets what laser-guidance systems have done for bombs.

Currently the project is focusing on nighttime sniping. This may be because the guidance laser loses effectiveness in daylight; the guide laser may be washed out.

But as far as proof-of-concepts go, EXACTO is a clear success. Future improvements in guidance systems are sure to expand on EXACTO’s capabilities. And they’re not going to stop with sniper rifles. They plan on rolling EXACTO out with other weapon systems including vehicle-mounted and naval guns.

One thing’s for sure: we would love to see another live-fire exercise. Will someone kindly loan DARPA an M2?