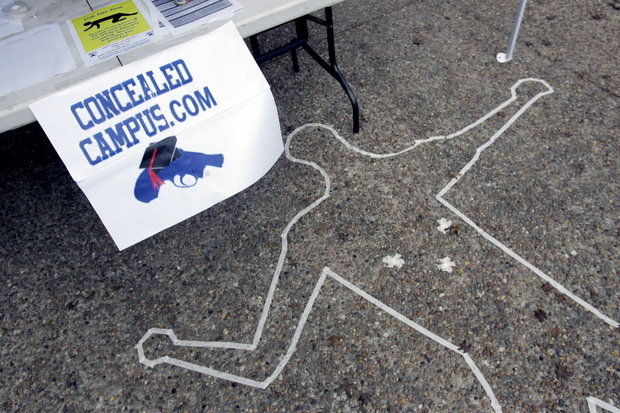 Signs and a replica of a crime scene draw attention to a booth for Students for Concealed Carry, who have filed a lawsuit seeking to allow guns at Ohio State University. (Photo credit: Eric Gay/AP)

“Ohio State’s campus gun ban unlawfully infringes on fundamental constitutional rights,” the groups said in a statement on July 7. “It also disarms students to and from campus, leaving them vulnerable to violent crime on their commute in what is historically a high crime area. While Ohio law permits a concealed handgun licensee to store a firearm in a motor vehicle on OSU’s campuses, a student could face administrative sanctions from the university including expulsion due to the certain provisions in the student code of conduct.”

The groups filed suit in the Court of Common Pleas for Franklin County this week seeking an injunction against OSU from applying their rules and policies. At the heart of the matter is the university’s firearms and weapons policy which carries the blanket statement that, “No person shall be permitted to carry or possess a concealed or unconcealed firearm, weapon, or other hazardous materials on the university campus, other premises owned or within the control of the university, or at functions sponsored or sanctioned by the university.”

However, Ohio law allows for the preemption of  local ordinances and rules that are in excess of the state’s own law and ensures the ability of those to challenge for relief in local courts. This was recently seen in action when the Ohio Supreme Court struck down Cleveland’s gun laws following a suit by gun rights advocates.

Attorneys for the groups contend that students who find themselves inadvertently on the wrong side of school policies can suffer long-term damage. “Some will be fired from their job or kicked out of school,” said Michael R. Moran, a Columbus attorney in the case to Campus Reform.”It can prevent you from completing a degree; it can also prevent you from transferring to another school, obtaining a graduate degree.”

OSU appears to feel justified in their policies, and said that no students have been disciplined under the university’s gun polices in the past four years. “Our goal is to ensure that our policies comply with the law, and we believe ours do,” Gary Lewis, an OSU representative told the Columbus Dispatch. “It is important to note that the practice of prohibiting open carry of a firearm on campus mirrors that of other universities statewide.”

Although OSU is the only state-funded university named in the concealed carry lawsuit, surveys of several schools in Ohio found that at least five have similar policies including the University of Cincinnati and Wright State.

In recent years, student-based concealed carry organizations have fought for their rights to be extended to their state-funded campuses. Such efforts have been seen in Kentucky, Texas, and Georgia. One challenge to such policies in Florida in 2013 ended with a victory for gun rights supporters when an appeals court ruled that state universities do not have the power to ban law-abiding gun owners from keeping loaded firearms in their vehicles while on campus.

A court date for the OSU case has been set for July 2015.