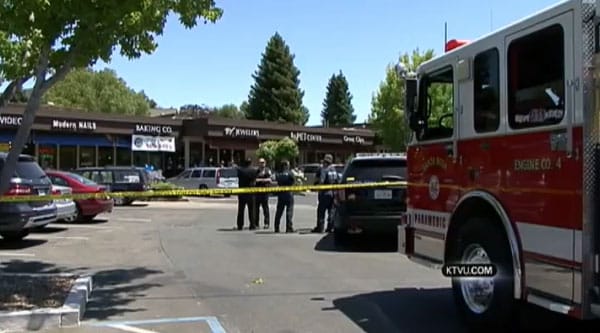 The owner of a nearby bakery actually saw the two suspects, masked and armed, walking up to the jewelry store and immediately called 911. (Photo credit: KTVU)

A botched robbery at a California jewelry store Thursday afternoon left an employee and two suspects shot. The Santa Rosa store owner told reporters it was the second robbery attempt in less than a year and the second time he has had to shoot at armed robbers to protect his employees and himself.

It was about 1:40 p.m. when the two suspects, wearing masks and carrying guns, walked into Bennett Valley Jewelers. One started smashing glass cases, while the other grabbed Suzanne Dodd, who has worked at the store for 13 years, and put a gun to her head.

But the store owner, Ty Visscher, who was also armed, stepped in in an attempt to defend Dodd and everyone else. Visscher and the two suspects exchanged gunfire. Authorities believe both suspects were hit, but one ran off, leaving his critically wounded comrade behind.

As shots rang out, an off-duty police officer who was at a restaurant across the street, came to Visscher’s aid, subduing the wounded suspect until other officers could arrive.

The suspect, later identified as 43-year-old Jimmy L. Terry, was taken to a local hospital where his injuries are considered to be life-threatening. Terry, who was released from prison less than two weeks ago after serving time for a home invasion, was struck several times in the chest.

Meanwhile, authorities searched the area for the second suspect, who they believe was shot in either the abdomen or legs, but was unable to apprehend him.

Dodd, who is expected to make a full recovery, was also struck in the arms by gunfire during the exchange, although it’s unclear at this point whose gun the bullets came from.

Nonetheless, Dodd is still grateful for Visscher’s efforts to protect her.

“I will always be grateful to Ty. He did his best,” Dodd said.

The would-be robbers were precise about the merchandise they were after – Rolex watches.

“The most sought-after watch in the world,” Dodd said. “They’re like a Mercedes. They hold their value.”