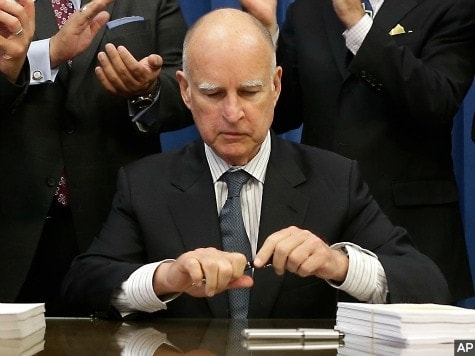 Gov. Jerry Brown will have to decide on AB 1964, a measure that some gun rights groups contend should be vetoed due to its “plain absurdity.” (Photo credit: AP)

The California Association of Federal Firearms Licensees (CAL-FFL) is asking Gov. Jerry Brown (D) to use his veto powers on a bill that would stop the popular practice of the ‘single shot exemption’ for modified semiautomatic handguns.

The legislation, AB 1964, would limit the guns eligible to be converted to “break-top or bolt-action.” Further, the bill would require any gun that has been converted to meet all of the same testing requirements on the state’s semiautomatic handgun list. It had previously passed the Assembly by a 48-25 vote and the Senate by 22-13 before being presented to the governor on July 9.

“The clear intent of AB 1964 is to eliminate even more firearms in common use for lawful purposes from the non-peace officer (i.e., ‘regular person’) marketplace,” contends an open letter sent to Brown by CAL-FFL Thursday. “Even if the bill’s inherent constitutional defects were not enough to make the bill worthy of [Brown’s] veto, the plain absurdity of the text could not make for a better candidate for rejection.”

According to the group’s website they speak on behalf more than 100,000 individual supporters and members that “include gun owners, collectors, training professionals, shooting ranges, dealers, manufacturers, and others who participate in the firearms ecosystem.”

They contend the measure would ban the sale of most modern handguns in California.

CAL-FFL further points out that AB 1964 was introduced to the state assembly by Roger Dickinson, a Democratic party Assemblyman from Sacramento whose previous two gun control measures, AB 2460 in the 2011-2012 session and AB 169 in 2012-2013, were the prior subject of Brown’s veto pen. For his part, Dickinson, contends that as many as 18,000 of what he terms “unsafe” single-shot handguns were transferred in the state in 2013, and his bill, now before the governor, would halt this practice.

“AB 1964 will ensure that all handguns purchased through a dealer in California are handguns which meet all safety and firing tests and contain all state required handgun safety features,” said Dickinson in an earlier statement on the measure. “This loophole threatens to seriously undermine existing state handgun safety laws and requirements,” he added.

Brown has until Sept. 30 to sign or veto bills passed by the state legislature.