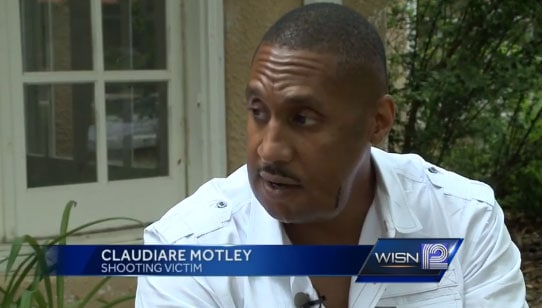 “We were hoping and praying that we’d get justice for what happened,” said Claudiare Motley, who was shot in the face during a carjacking last month. (Photo credit: ABC)

A 15-year-old boy, who was accused of participating in multiple carjackings around Milwaukee this summer, is now paralyzed after his last intended victim shot him during an attempted robbery, local media reported last week. He is also accused of shooting another victim in the face as the victim tried to flee during a carjacking, just a day prior to the incident which left the teen shot.

Claudiare Motley, who had returned to Milwaukee for a high school reunion, had just dropped off a friend when two cars pulled up beside him.

“Next thing I know, somebody was tapping at the window with a gun,” Motley recalled.

But instead of turning over his car, Motley fought back any way he could. He punched the gas, ramming the car in front of him, in an attempt to get out of the dangerous situation. But as he drove off, the suspect fired his gun, sending the bullet flying through Motley’s jaw.

“I was blessed because of how the bullet traveled. I was blessed that I was able to keep my senses, and I’m blessed to be right here now to tell people that this type of violence is senseless,” Motley said.

The following day, near the same location, Victoria Davison was approached by two people while she was in her car. According to Davison, the suspects said they wanted “the keys, car, everything” before one of the suspects said to the other, “Go get the cannon.” Davison assumed “cannon” meant gun, but the boys were in for an unexpected surprise.

Davison, who has a concealed carry permit, reached into her gym bag and pulled out her own gun.

“I shot the one that was in front of me. The one in the back of me, he said a curse word, and then he looked at his friend, and then he ran off while his friend was on the ground,” Davison said.

Following the incident, police started to piece several recent robberies together. It turns out the suspect who Davison shot was the same person accused of shooting Motley the day before. The suspect, who is just 15-years-old, remains in the hospital and is now paralyzed.

Davison says prosecutors want to charge the teen as a juvenile, but she believes he should be charged as an adult.

“I mean he’s 15, but he’s making adult decisions. One robbery? Maybe he should be charged as a juvenile because he needs to learn a lesson, but several?” she said. “Even after he shot somebody in the face. Then you are still committing robberies, and that was when he tried to rob me.”

And Motley, although sympathetic of the teen’s injuries, believes they are the result of his own actions.

“Too many times in today’s community these kids are recklessly throwing away their lives by making decisions that forever change their future,” he said.

“It is too bad, but like they say, ‘We reap what we sow.’ You know, he decided to pick up a gun and play a game, that’s the outcome,” Motley added.

“It’s unfortunate that this 15-year-old is now a victim,” Kimberley said. “But he made my husband a victim with his bad decision. That’s sort of the price you pay when you shoot a man in the face, and try to victimize a woman who has a concealed carry permit.”

But Motley, who says police can’t solve the problem on their own, also stated, “Violence is just a byproduct of what the true issues are.”