The Selective Service System mistakenly sent 14,250 draft notices to Pennsylvania men born between 1893 and 1897. The agency began mailing the letters June 30 and within days confused family members began calling in. 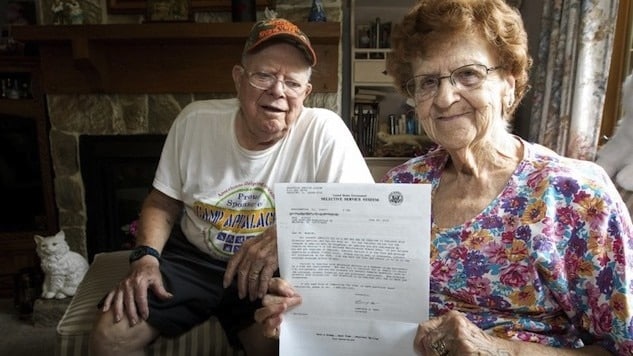 “Harold Weaver sits behind his wife, Martha, in their Nickleville, Pa, home. Martha holds a letter from the Selective Service for her late father, Fred Minnick, requiring him to register for the nation’s military draft.”

Chuck Huey, 73, was surprised when he received a draft notice for his late grandfather, Bert Huey, who had served during WWI.

“I said, ‘Geez, what the hell is this about?’” Huey said. “It said he was subject to heavy fines and imprisonment if he didn’t sign up for the draft board. We were just totally dumbfounded.”

The error originated with the Pennsylvania Department of Transportation. When the agency transferred nearly 400,000 records to Selective Service, one of the clerks forgot to select the century.

“We made a mistake, a quite serious selection error,” said PennDOT spokeswoman Jan McKnight. “We’re really sorry. We apologize.”