Illinois governor calls for ban on 'assault weapons,' .50 caliber guns in response to 'war' on the streets (VIDEO) 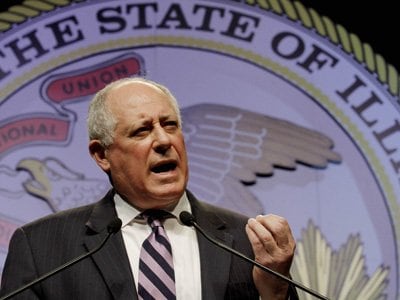 Gov. Pat Quinn is for at least the third time in three years calling for an assault weapon ban in Illinois. (Photo credit: AP)

The governor’s call to action comes following the latest spate of gun violence in Chicago that left some 50 people injured.

“Public safety is government’s foremost mission and Illinois should not wait any longer to act,” Quinn said in a statement Sunday. “There are too many victims of a war being waged on our streets, a war fueled in part by the availability of deadly, military-style assault weapons that have no purpose other than killing.”

Quinn is publicly throwing his support behind state Senate Bill 3659, also known as the Illinois Public Safety Act. The 24-page bill would forbid future sales of what the state determines to be “assault weapons” and designates magazines capable of holding more than 15-rounds as “large capacity,” which also would be regulated.

In addition, both .50 caliber rifles and the ammunition used in them would be restricted. Current firearms owners identification card holders would be grandfathered but could only transfer these items to family members in the future.

Further, the bill carries language that would expand background checks on firearms transfers inside the state to include private transactions. Should the legislation pass in its current form, it would require two private parties wishing to transfer a firearm do so through a federal firearms license holder after performing a background check.

However, a recent study by criminology professor James Alan Fox contends that mass murderers rarely use assault weapons, cannot be prevented with background checks and gun bans, and that the rates of these shootings as well as their toll is not increasing.

This latest effort is a return by Quinn to familiar territory. In 2012, he used his amendatory veto power to turn a moderately pro-gun piece of legislation into a ban on semi-automatic rifles, high capacity magazines and .50-caliber rifles, which was defeated in the state senate.

This setback did not stop him from calling for a renewed look at an assault weapons ban and suggesting the National Guard be deployed to Chicago in 2013.

The bill that now finds the governor’s support was introduced in May to the state senate by Sen. Dan Kotowski (D-Park Ridge), but has not gained traction and was still in committee when the regular session ended on May 31. However, it is unclear if Quinn or the legislature will call a special session later this year, during which SB 3659 could be resurrected. Barring this, the gun control bill would have to be introduced to in the 2015 session, set to begin next January.

Currently, the Democratic Party controls both houses of the Illinois General Assembly by large margins.

“This is a common-sense solution to preventing gun violence and keeping our children and families safe,” Kotowski said. “This measure will protect our communities by ensuring that military-style assault weapons are off the streets and out of hands of criminals.”

The National Rifle Association has already condemned the legislation. “SB 3659 embodies the anti-gunner ‘wish list’ in Illinois,” read a statement from the NRA’s Institute for Legislative Action. “This legislation is a comprehensive anti-gun package which echoes the unconstitutional legislation passed in New York and Connecticut last year. The laws passed in those states are currently subject to lawsuits due to their significant infringement on Second Amendment rights.”