A Savannah stranger who was offended by a “I Love My Soldier” decal left a threatening note on a military fiancé’s windshield.

After shopping at Target, Ellen Wilson returned to her vehicle to find a handwritten letter ranting about the immorality of war and the role so-called “soldiers” play in it, WTOC reports.

So I noticed your “I love my soldier” decal. I’m sure he is your “hero” too right? I feel really bad for you and how blind you must be to what is really going on in this country.

First off he is NOT your hero. Your “man” is a pawn being used in the immoral game of wholesale murder. If you’re aware of the real reasons America goes to war (corporate profits) and the role “soldiers” play in the making such immoral acts possible the last thing you would label a soldier is a hero.

There is noting heroic about blindly following immoral orders for a undeserved paycheck, especially when such orders involve the unnecessary murder of others.

It’s people like you and your “soldier” who are destructing our country shame on you bitch! You’re lucky I didn’t slash your damn tires!!

Wilson couldn’t believe the content of the letter, but said she refuses to get angry over it.

“How could someone do this?” Wilson asked. “I’m not mad. It’s fine what you believe in and what I believe in, but I’m not going to hate you for it. But to attack somebody else, especially someone close to me, is a different story.”

The stranger failed to leave their name or any contact information. 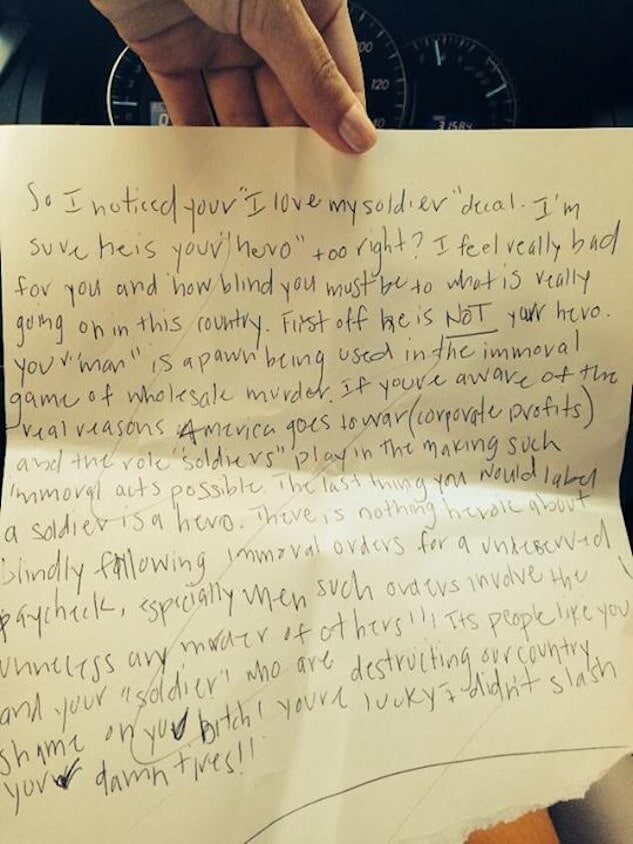