An elderly Detroit robbery victim who was recently held at gunpoint opened fire on a news crew who was hoping to interview him Monday.

On July 9, the 88-year-old man answered his door to find a woman and two men standing outside. The men forced their way in and shoved the victim to the ground. They also restrained him, held a gun to his head and wrapped a blanket around his face. When a news crew responded several days later, the homeowner opened fire, the local ABC-affiliate reports.

After tying the victim up, the thieves made off with $600 in cash, a cellphone and a wallet. The next day, the victim managed to charge a second cell phone and call for help. 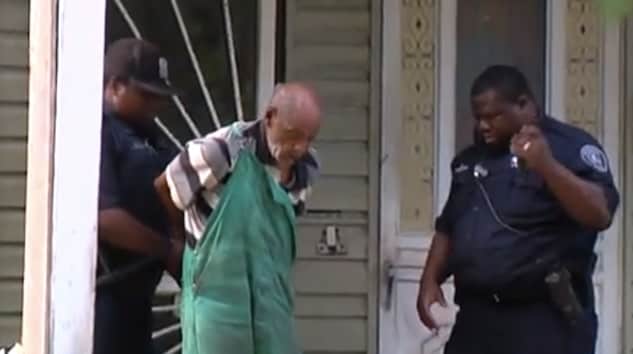 The 88-year-old victim-turned-suspect was arrested after opening fire on a responding news crew.

Five days after the robbery, a reporter and cameraman went to the victim’s home. They identified themselves as the media, but the victim refused to come out.

The news crew eventually gave up and began walking away, and that’s when the victim opened his door and fired one shot. No one was injured.

The reporter and cameraman dashed behind a tree and called 911. Responding officers argued with the victim-turned-suspect before finally arresting him and transporting him to a crisis center for a psychological evaluation.

The thieves are still at large.