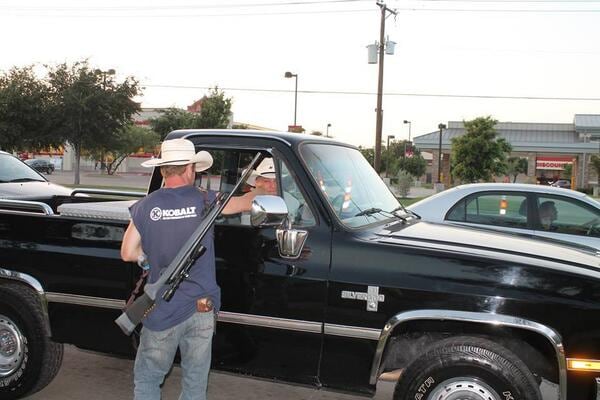 A member of Open Carry Tarrant County hands out literature at a recent event held in the Fort Worth area. (Photo credit: Brittni Greig/Facebook)

Gun rights group Open Carry Tarrant County (OCTC) won the first round of a federal lawsuit against an effort by Arlington, Texas to prevent them from handing out literature at city intersections.

The group had filed suit in May against the city to prevent enforcement of a local ordinance against pedestrians handing out material along designated roadways to motorists that are not in parked cars. The activists believed the law would ban their long-held practice of handing out literature and other materials, including copies of the U.S. Constitution, in the city.

“The fact that plaintiffs tactics or message may cause some people to be uncomfortable is not a proper motivation for limiting free speech rights,” Judge Reed O’Connor, a 2007 Bush-appointment to the U.S. District Court, Northern District of Texas, wrote in his 26-page ruling Monday. In his conclusion, the judge granted an injunction against the city in the group’s favor until the case could be settled.

While the city maintained all along that their issue was not one of free speech but of public safety, fearing traffic accidents from cars stopping to take literature from foot-borne activists, the court did not agree with Arlington. The ruling specifically relates that the city failed to present any evidence to support its concerns. Further, the city was only able to offer the fact that two citations were written for violation of the local ordinance in question since 1995– and both of those to members of OCTC in recent months.

“We are elated by the court’s decision to grant temporary relief from what we believe to be clearly a unconstitutional ordinance on its face,” read a statement released by the group. “While we understand this is simply a preliminary victory for our cause, we hope the City of Arlington will move to dissolve the ordinance, rather than dragging its citizens’ resources through the courts.”

A court-ordered meeting between the city and the gun rights group is set for no later than July 28 to hash out an agreement and report back to the judge by Aug. 11. If no agreement can be had, the case may continue through the appeals process and eventually wind up at the Supreme Court.

OCTC President Kory Watkins told Fox FW that within hours of the victory, the group was back to handing out pocket copies of the Constitution with a larger “Hand Out Party” planned for Arlington city streets July 17.