An Oklahoma City woman recently found Google street view images of the two men that robbed her at gunpoint three years ago.

In July 2011 the unidentified victim, who wishes to remain anonymous, returned to her home to find the two armed suspects in the middle of their robbery. When the robbers spotted the victim, they took her hostage before releasing her, KFOR reports.

“And then they pulled a gun and held me for over an hour,” the victim said, recalling the robbery. “There were times that I thought they would shoot me before they left.”

At one point during the hostage situation, one of the robbers began to feel guilty for his crimes. 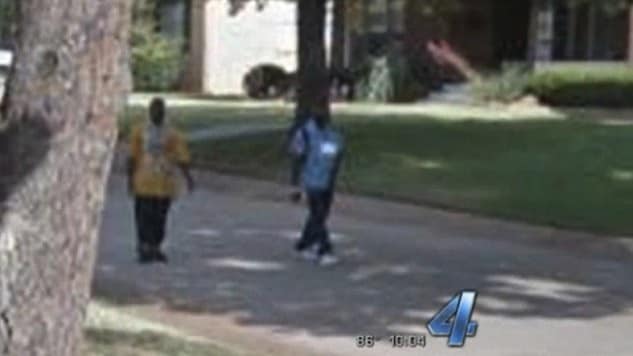 This Google street view image shows two men that match the description of the armed robbers from three years ago.

“He actually sat at my dining room table and said, ‘I think my karma is going to catch up with me,’ and I just looked at him like, ‘yeah,’” the victim said.

After the crooks got what they came for, they finally released the victim unharmed.

Three years after the fact, one of the victim’s friends was viewing her house on Google maps when she discovered two men matching the robber’s description.

The victim says she’s still scared three years later, but knows she was lucky to escape the robbery uninjured.

“I was lucky they didn’t hurt me,” the victim said. “I was very lucky that day.”