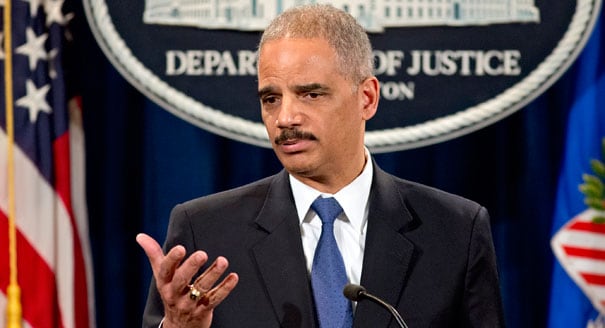 The Citizens Committee for the Rights to Keep and Bear Arms (CCRKBA) filed suit Tuesday in federal court against Attorney General Eric Holder and the Bureau of Alcohol, Tobacco, Firearms, and Explosives (BATFE) director over current law that bars cross-state handgun transfers.

The suit was filed in U.S. District Court for the Northern District of Texas, Fort Worth division, over the case of a couple from Washington, D.C. who tried to buy handguns from a federally licensed firearms dealer (FFL) but could not due to federal law.

“It is overreaching, if not downright silly, in today’s environment with the federal instant background check system to perpetuate a prohibition on interstate handgun purchases that has outlived its usefulness,” said CCRKBA Chairman Alan Gottlieb in a statement Tuesday. “If a law-abiding citizen can clear a background check and legally purchase a handgun in his own state, he would pass the same background check just across the border in another state.”

The suit names both Holder and BATFE director B. Todd Jones as defendants. Under attack is the Federal Regulatory Regime set up by the Gun Control Act of 1968 that bars FFLs from selling handguns to potential eligible buyers who do not reside in the same state that the dealer is located. No such restriction applies to the interstate sale of rifles or shotguns.

The 11-page complaint in what is now CCRKBA/Mance v Holder has the gun rights group as co-plaintiffs with Frederic Mance Jr., a Texas FFL, and gun buyers Andrew and Tracey Hanson, of Washington, D.C.  Mance would like to sell handguns to out of state consumers, such as the Hansons, but is precluded by federal law although the laws of Texas do not prohibit the transaction.

On June 21, 2014, the Hansons visited Mance’s gunshop in Texas but could not by law take possession of a handgun there. Mance could have shipped handguns bought by the couple in Texas to the District’s only FFL that handles interstate transfers, but according to the complaint, the dealer charges $125 per transfer in addition to shipping costs and other fees.

Besides the relief requested to be able to transfer handguns to visiting nonresidents, the suit further claims the prohibition prejudices handgun sales and artificially inflates prices as not all dealers are willing to perform interstate transfers, and when they do there is a fee involved. Further, the additional cost of more expensive shipping options to overnight handguns, rather than the cheaper options for shipping long arms like shotguns and rifles, also add to the price.

“Federal law with respect to interstate rifle and shotgun sales provides a ready example of a more carefully tailored alternative, prohibiting sales that violate state law and permitting those that do not,” the complaint states. “There is no need to criminalize the entire interstate handgun market.”

In addition to an injunction, the suit asks for attorney’s fees and any other relief the court deems just and appropriate.

Attorney William B. Mateja of the Dallas firm of Fish and Richardson will handle the case.