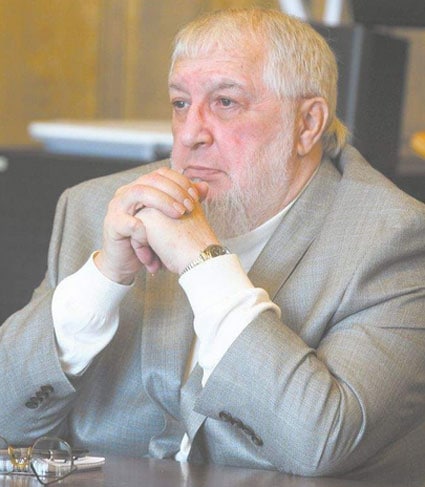 Wise attended his trial in a wheelchair due to problems surrounding his own declining health. (Photo credit: Associated Press)

John Wise, the 68-year-old man convicted of murder after fatally shooting his sick wife while she laid in a hospital bed, died Monday in a Columbus prison medical center, the Associated Press reported.

“Cause of death was indicated as cardiac arrest,” said Wise’s attorney, Paul Adamson, in a statement. “We prefer to believe John died of a broken heart.”

In 2012, Wise found his wife, Barbara, lying on the bathroom floor of their Massillon, Ohio home, choking on her own vomit during what appeared to be a seizure, but she had in fact suffered from triple brain aneurysms.

The following week, Wise visited his wife at the hospital with their son. As the two stood beside her in what Wise believed was a comatose state, he noticed a tear roll down her cheek. In their younger years the couple had discussed and agreed that neither of them wanted to continue to live if they ever became bedridden or disabled to the point of being unable to care for themselves.

So several hours after the visit with his son, Wise returned to the hospital room, stood beside his wife of 45 years, put a handgun to her left temple and pulled the trigger. Wise later said the incident was a blur, but a doctor who was there that day recalled him saying, “Oh, she’s alive. How could she still be alive?” after Wise was restrained by security.

Barbara lived for another day after being shot.

Wise, who also had a plethora of health problems, including cancer, when his wife became sick, maintains that he never intended any ill measures against her and that he only killed her to keep her from continuing to suffer. However, one doctor testified during the trial that Barbara would have likely recovered and returned home following treatment.

There are likewise claims that Wise was misinformed of his wife’s comatose state, and that he also intended to kill himself the same day but his gun jammed before he was subdued by security.

Nonetheless, Wise was convicted of aggravated murder and felonious assault by a jury. Prosecutors requested a lesser punishment for Wise, who was eventually sentenced to six years in prison.

Wise’s death was confirmed by the Ohio Department of Corrections spokesperson JoEllen Smith, who says there were no suspicious circumstances surrounding his death and no foul play is suspected. Smith agreed they expect the cause of death to be cardiac arrest.

In a sworn statement notarized by his attorney, Wise said, “I committed a horrible act while in a depressed and desperate mental state. I am truly sorry for what I did. Although I had nothing but good intentions, that is no excuse.”