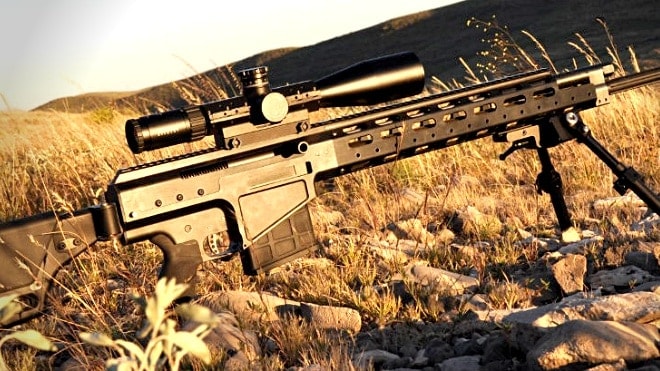 The Ulfberht all dressed up. (Photo credit: AA)

Alexander Arms, the company behind the 6.5 Grendel and .50 Beowulf cartridges and rifles, is gearing up to launch a new semi-automatic rifle chambered for .338 Lapua Magnum. They are currently taking pre-orders for these hard-hitters with delivery expected very soon.

While they have a passing resemblance to AR-style rifles and even share some parts, these are not just beefed-up Stoner rifles.

“We are producing something completely unique and innovative in modern firearms,” explains Alexander Arms. “Ulfberht is a .338 Lapua Magnum semi-automatic rifle with a simple, but extremely effective design, built from start to finish to be the most reliable and strongest-performing long-range, semi-automatic, .338 Lapua Magnum weapon ever produced.”

The Ulfberht, named after a rare and unique type of Viking sword, is actually patterned off the Russian Degtyaryov or DP machine gun. A mechanically-simple design, the Ulfberht rifle is proclaimed to have only 10 moving parts that require maintenance. This is a rifle designed to be dragged through the worst and carry on like nothing happened.

It is a piston-driven design, which not only promote reliability in harsh conditions it can be tuned to work with light loads or when using a suppressor. The barrel is threaded for 18×1.5 metric muzzle devices and ships with a three-prong flash hider.

The fluted chrome moly barrel measures in at 27.5 inches and has a 1:9.3-inch twist. The receivers are made from steel and the rifle has a folding Magpul PRS stock. The rifle also accepts AR pistol grips and will come standard with an Ergo grip.

The Ulfberht also uses AR triggers and comes with a Geisselle SSA two-stage match trigger. Included with every Ulfberht are four 10-round polymer magazines and each rifle will ship in a custom hard case.

Right now the specifications aren’t completely fixed and the final product may see some changes. The expected weight is estimated to be just under 20 pounds without glass or a bipod, which combined with the semi-automatic action, means that the Ulfberht should be a pleasure to shoot.

Alexander Arms is pricing the Ulfberht at $6,850. Dealer pricing will be less. Time will tell if street prices will be lower, but anyone looking to get in the .338 Lapua Magnum game shouldn’t be shocked by the sticker.

And while they’re taking pre-orders, this is just to secure a position in line when they start shipping. Alexander Arms will not charge customers until the rifles are shipping out the door.

In any case, we look forward to seeing these in person. Who doesn’t want to get behind an Ulfberht?

We know a lot of people won’t be able to afford an Ulfberht, but that doesn’t mean they can’t afford an Axlexander Arms rifle. They have many other guns, including long-range rifles chambered for 6.5 Grendel, that are much more wallet-friendly. Check out their website for more information.