Armed robbers hold infant at gunpoint, threaten to bake him in oven during home invasion 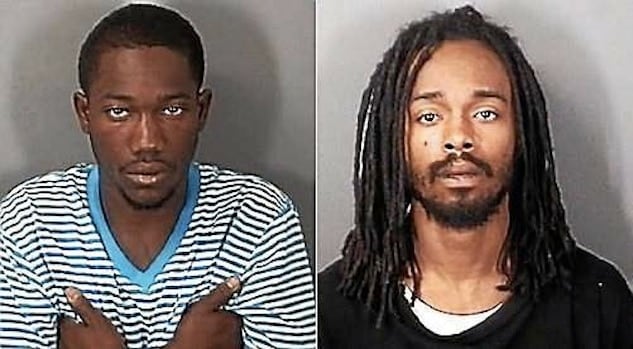 Predvil, right, and Jean didn’t realize the police had been called while they were holding an infant at gunpoint during a home invaison.

Two robbers put a gun against an infant’s head and used the child as leverage during an unusual home invasion in Trenton Saturday night.

Mcghore Jean, 25, and Wicky Predvil, 21, broke into the home around 10 p.m. and demanded money. While there were three adult women inside the house, the crooks focused their attention on an 8-month-old boy, NJ reports

One of the suspects paused from ransacking the house to grab the baby boy and put a gun against his head, threatening to bake the child in the oven if he didn’t get what he wanted.

What the suspects didn’t realize, however, was that when they barged into the residence, one of the victims was on the phone with another family member. The person on the other end heard the robbery taking place and called police.

Officers responded to the home and the thieves bolted upstairs. But with nowhere to go, they were quickly apprehended.

Jean and Predvil were charged with robbery, aggravated assault, burglary, theft, weapons possession, and endangering the welfare of a child.