Hotel guest 'looking for someone to kill' finds the wrong hombre 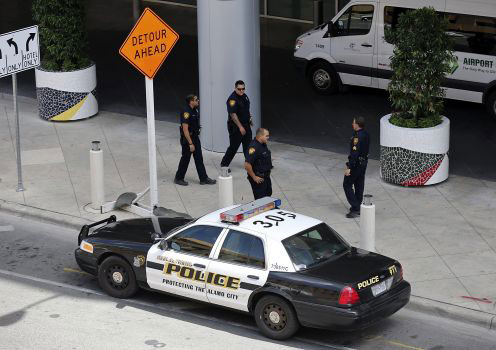 It is unknown how long the man had been suffering from mental health issues. (Photo credit: San Antonio Express-News)

A disruption at a downtown hotel in San Antonio Saturday afternoon ended with one man being killed after he charged at another man who happened to have a legally carried concealed handgun.

John Neal, 43, was staying at the Grand Hyatt Hotel when he began hearing a commotion in the hallway around 1 p.m. According to local media, Moises Torres, 34, was breaking the lights lining the halls and banging on the doors as he went from one room to the next on the sixth floor of the hotel.

One woman told police she opened her door when Torres began banging on it and he told her he was “looking for someone to kill.” The woman was able to slam the door before he got inside, but then he moved on to the next room, where Neal was located.

Neal left the door closed and initially ignored Torres’ attempt to get inside. He called security and when he thought Torres was gone and the area was safe again, Neal, accompanied by a woman, opened the door.

At that point, Torres appeared again and charged at Neal and his female friend. Neal, fearing for his safety, then pulled out his pistol and shot Torres a single time in the chest, stopping him in the doorway to Neal’s hotel room.

When paramedics arrived, they attempted to administer medical care to Torres, but were unsuccessful in reviving him. He was pronounced dead at the scene.

Torres’ family members apparently told the police he had been “suffering from some undiagnosed mental issues recently.” The type of issues was not made known, nor was it disclosed if Torres had suffered from psychological problems in the past.

Police did confirm that Neal had a valid concealed carry permit and is not facing any charges at this time.

It is unclear whether or not Torres possessed a weapon of any kind.