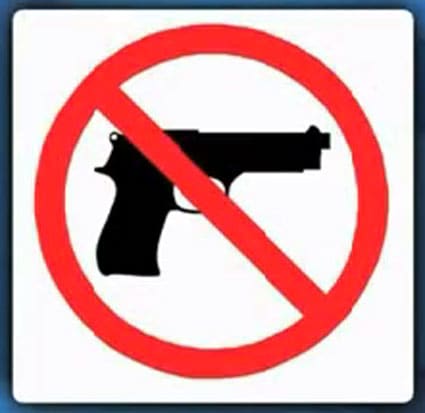 The man didn’t see one of these on the door, so just assumed it was okay for him to carry his gun. Clearly, he was wrong. (Photo credit: KSN)

Police were called to a theater in Salina, Kansas, Tuesday morning after a man seen legally carrying a firearm became upset when asked to leave.

According to local media, it was about 11 a.m. when patrons began to complain to the management that the man, whose name was not released, had a holstered handgun. Theater staff said some of them asked for their money back as they went to leave.

But the man was irritated when asked to leave because the theater did not have a “No Guns Allowed” sign. When officers arrived they explained to the man that although there was no sign posted, the management still had the right to refuse service to anyone for any reason.

The man, who theater staff and police confirm was not acting in a threatening manner, then left without further incident. No charges were sought because the man did not break the law.

Authorities confirmed that the man had a valid concealed carry permit. And although he was intending to carry concealed, it was apparently obvious to those around him – thanks to “printing,” where the outline of the gun is visible through clothing — that he was, in fact, carrying a firearm.

“He was carrying it in such a manner that it was bulging from his side and the customers could tell he was carrying,” said Capt. Mike Sweeney of the Salina Police Department.

Bob Muir, who runs a local sporting goods store, told reporters that printing can be avoided by choosing better gear.

“You can sometimes tell that is the handle of a gun because you can see the trigger guard,” said Muir, who also pointed out that the responsibility of knowing local gun laws falls on the gun owner.

But it wasn’t the law which was the issue in this particular case.

In the state of Kansas open carry is legal, although individual cities previously had the option to bypass this law, making open carry illegal in that particular place. However, on July 1 new legislation went into effect allowing open carry in any place across the entire state, so long as there is no sign posted prohibiting such. The legislation was pushed as a means to create uniformity across the state and legal clarity.

There was no word on whether the theater plans to post a “No Guns Allowed” sign in the future.

Thanks to Guns.com fan, Brad, for tipping us off to this story. If you see a story that you think deserves attention, send it to tips@guns.com.