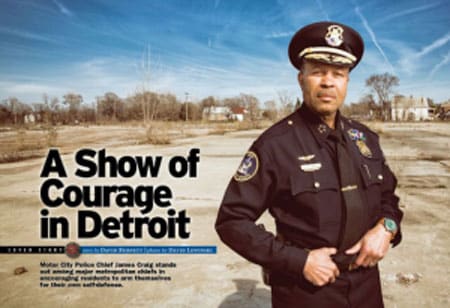 “What I have said, and continue to say, is I believe responsible, good Americans have a right to protect themselves from an immediate threat to their life or to the life of another,” Chief Craig told the NRA-produced magazine. (Photo credit: NRA)

Although Detroit has notoriously been known for its high crime in the past, the city is now on a bit of an upswing. According to Detroit Police Chief James Craig, crime has fallen a significant amount so far this year, and Craig attributed the drop, in part, to armed citizens fighting to take their city back against criminals.

“Criminals are getting the message that good Detroiters are armed and will use that weapon,” Craig told The Detroit News. “I don’t want to take away from the good work our investigators are doing, but I think part of the drop in crime, and robberies in particular, is because criminals are thinking twice that citizens could be armed.”

So far this year, the city has experienced a 37 percent drop in robberies compared with the same time period last year. In addition, there have been 22 percent fewer break-ins of both homes and businesses and 30 percent fewer carjackings.

Craig admitted that he was unsure which part of the decrease in crime could be accredited to the increasing number of armed citizens, but said, “there’s no question in my mind it has had an effect.”

The end of last year, Craig dropped jaws when he publicly made a pro-gun stance, one not typically heard among urban police chiefs.

“I think it acts as a deterrent,” Craig said on The Paul W. Smith Show in December. “Good Americans with CPLs translates into crime reduction.”

Then in May, Craig was featured in an NRA magazine for a story titled “A Show of Courage in Detroit.” In that piece, Craig made mention of the number of would-be victims who fought back against their assailants earlier this year. For the first five months of 2014, week after week, armed citizens in Detroit were breaking headlines with stories of courage in the face of fear, in what appeared to be somewhat of a trend. And as crime has slowed throughout the year, so have defensive gun uses. In fact, the last publicly reported defensive gun use in Detroit was May 4.

But not everyone agrees with the stance that more guns equals less crime.

“Our position is, more guns equals more crime,” argues Josh Horwitz, director of the Coalition to Stop Gun Violence in Washington D.C..”These are complicated issues, but the empirical evidence shows the states with the lowest gun ownership and the tightest restrictions have the fewest instances of gun violence.”

“They automatically assume another criminal is carrying,” he said. “I’m talking about criminals who are thinking of robbing a citizen; they’re less likely to do so if they think they might be armed.”