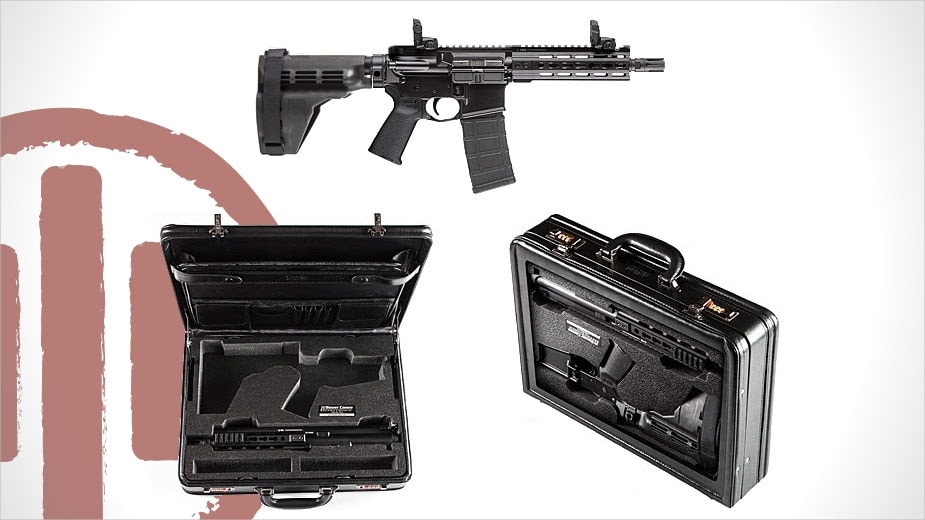 Primary Weapon Systems has just announced a James Bond-inspired briefcase kit, based on their MK107P AR-15 pistol. The MK107P is a compact piston-driven .223 Wylde upper for use with pistol or SBR lowers.

The kit is being sold as with the case and the upper, with lowers sold separately — a calculated move that lets users provide their own pistol or short-barreled rifle (SBR) lowers. Naturally PWS sells lowers if customers need them. The cutout for the lower is designed to accommodate either a SIG Sauer SB-15 pistol brace or a Magpul MOE buttstock.

As part of the promo the briefcase kit is listed at the same price as the standalone upper. Basically buy the upper, get the briefcase for free.

And the case befits the premium MK107P upper. It’s a Kenneth Cole locking briefcase expertly customized by Bauer Cases. It has four cutouts, two for the receivers and two for magazines.

Designed for close-quarters encounters, the MK107, or “Diablo,” is just as suited for range time giggles as it is combat out to about 200 yards. Weighing in at just 3.2 pounds the upper is fit with a Triad 556 flash hider. The gas piston system is adjustable for use in harsh conditions or running with a suppressor.

The upper comes with a free-floating KeyMod handguard that stops right at the flash hider. It comes with two removable, adjustable Picatinny rail sections installed for use with accessories such as flashlights and angled foregrips. (Forward pistol grips may not be installed on AR-15 pistols in compliance with the NFA, but they can be installed on true SBRs.)

The “optics-ready” package has an MSRP of $1,449 and as usual, street prices are expected to be a good deal lower than that. If you’re looking to save a little money and still pick up a Primary Weapon System firearm, then check out their recently-introduced Modern Musket series.

The Modern Musket series is a new, more accessible line of PWS rifles and stripped uppers. These bear the quality that PWS users have come to expect at lower prices. They are conventional direct-impingement AR-15s that still sport all the other features of PWS’s firearms without the more expensive long-stroke piston system.

The Modern Musket rifles are the whole package. They include everything users need to get shooting except ammo.

PWS offers two models, the DI-16 and the DI-14. These carbines have 16-inch and 14.5-inch barrels, respectively. The DI-14 is not an SBR as it comes with a permanently-attached FSC 556 muzzle device that brings the overall length up to the required 16 inches.

They are built on the same forged receivers as other PWS rifles with the addition of the Modern Musket logo on the magwell. They use the same enhanced buffer assembly, the same enhanced bolt carrier group, the same ultralight free-floating KeyMod handguards — the only significant difference is that they are direct impingement.

Complete Modern Musket rifles ship with a powered red dot optic, a Lucid HD7. These are a solid choice for these rifles. The HD7 adds little weight and is durable and clear. They get good battery life and have a rubber over-molded body that can take a beating and bounce back.

The Lucid optic also has an adjustable reticle allowing the user to select the one that’s right for them. It has a dot, a circle dot, a T and a graduated BDC reticle.

The rifles are priced at $1,499 and the stripped uppers just $699. Real-world prices again, are a bit less. For more information about the Modern Muskets and other PWS products head over to the Primary Weapon Systems website.