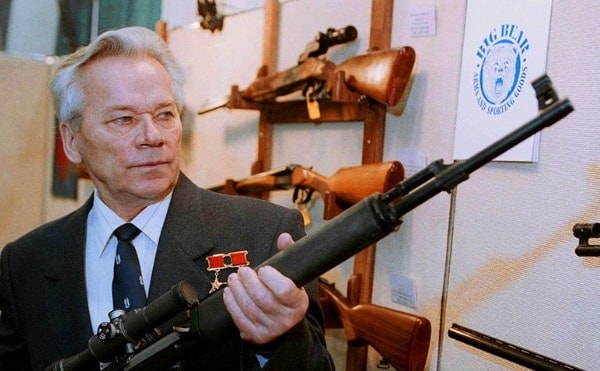 Mikhail Kalashnikov, after whom the Kalashnikov Corporation is named. (Photo credit: K.C.)

Following the recent sanctions against the Kalashnikov Concern, a conglomerate of several Russian arms manufacturers, the company has released a short statement:

“The Kalashnikov Concern (formerly Izhmash) — Russia’s largest producer of automatic and sniper combat arms, guided artillery shells, as well as a wide range of commercial products — also makes shotguns, sporting rifles, machines and tools. The company was founded in 1807 and is part of the state-owned Rostec corporation. … The company supplies 27 countries, including the USA, UK, Germany, Norway, Italy, Canada, Kazakhstan and Thailand.”

We used Google Translate and cleaned it up. You can see the full statement here.

It’s gotta be hard to be a Kalashnikov Concern. The company has only seen about a year of profitability following a complete state-led restructure after decades of mis-management. Despite their internal troubles they have been wildly successful in the U.S.

And while this move is stirring controversy among gun owners and AK fans, given the situation in Crimea it’s almost surprising this hadn’t happened sooner.

Russia put their small arms all in one basket. We can track baskets from space, and denying them access to the U.S. commercial market is the economic equivalent of a Predator drone strike.

Or maybe the Russian equivalent of a Buk missile hit.

We do love our Saigas and Veprs, though, and hope that this is a short-lived measure. It’s not as if Russia is going to let their singular arms manufacturer collapse in the meantime.

And since we can’t do anything to make sanctions go away, here’s a one-dude acapella rendition of the original Tetris theme.