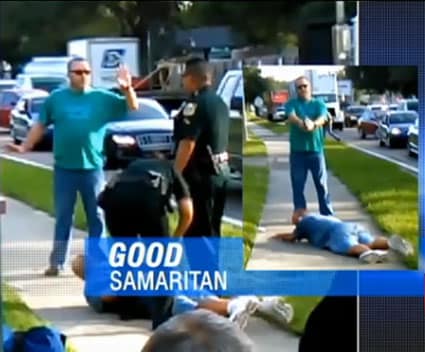 One witness caught images on a cell phone as the events unfolded. (Photo credit: WFTV)

An Orlando man is lucky to be alive after experiencing a nightmare Wednesday morning while waiting at a bus stop. He was stabbed multiple times during an apparent robbery, until several good Samaritans – including one who was legally armed – intervened, likely saving the man’s life.

It was just after 8 a.m. and 64-year-old Don Sacco was waiting at the bus stop, on his way to a bingo game when he was approached by Thomas Thorpe.

“I saw the bad guy smack and punch the older gentleman, telling him to give him his money,” one witness, who only wanted to be identified as Jessica, told reporters.

Witnesses say they could hear the man screaming, “I don’t have any money leave me alone,” as Thorpe was attempting to take the man’s bag and began stabbing him.

Jessica said she was driving down the street, but when she saw what was happening, she stopped her car and got out to help. However, she quickly realized that there was little she could do for the man.

But then something unexpected happened.

“There was a darker car that pulled in behind me, and he had a gun, he pointed a gun, so I put my head down because I wanted to live,” said Jessica. 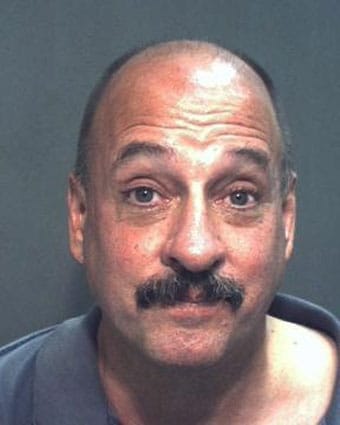 But the man with the gun wasn’t out to hurt anybody, he was just a guy who happened to be passing by and happened to also have a concealed carry permit and a legally owned handgun. The man, later identified as Jeffery Hopkins, held Thorpe at gunpoint until deputies arrived.

Meanwhile, Jessica helped Sacco as best she could, along with another man – a former paramedic — Josh Juliano.

Sacco remains in the hospital, recovering from several stab wounds to his abdomen, but is expected to survive.

“He’s in a lot of pain still, but he’s coming along,” said Sacco’s daughter, Heather Petti. “He forgets that it hurts when he laughs, and he tends to make himself laugh a lot.”

According to Petti, her father “was very surprised that there was still people like that in the world that will help strangers.”

Nonetheless, Petti, Sacco, and all of his friends and family are extremely grateful for those who stopped to help him.

“I am so grateful for them,” said Petti. “I love my father, and if it wasn’t for them, we wouldn’t be here right now. I’d be in a darker place.”

Petti also explained that her father is on blood thinners and the medicine that was meant to save his life, could have easily caused him to bleed to death when he was stabbed had it not been for those who quickly intervened.

“My father would be dead right now, if it weren’t for you guys,” she said when she met Hopkins and Juliano the day after the incident.

Thorpe was arrested and now face charges for attempted first-degree murder, aggravated battery with a deadly weapon and robbery.

Thorpe had his first appearance in court Thursday and through a brief exchange left the judge questioning his mental state. Thorpe appeared quite agitated and as if he was in a hurry. When asked if he wanted a public defender he politely declined, opted to represent himself and explained that he had “a lousy experience” with public defenders in the past and also believed that lawyers screw people.

Thorpe is being held without bond.