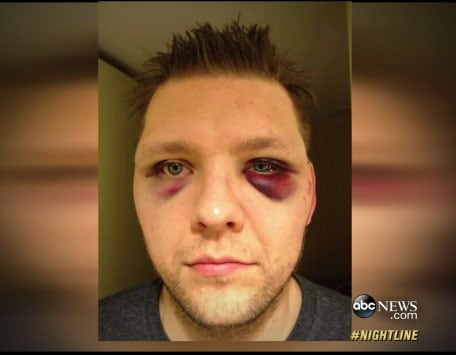 While the two suspects were beating James to a bloody pulp, Meredith had the opportunity to call 911. (Photo credit: ABC)

A couple living in East Orange, New Jersey never wanted anything to do with firearms and, in fact, strongly deplored the idea of having one. But after enduring a violent home invasion and sexual assault, the couple, whose story was included as part of the ABC docu-series “NY Med” earlier this month, is not only grateful to be alive, but are now proud gun owners.

James Dittrich and Meredith Duffy, who were engaged to be married, had just moved into their new apartment three months prior to the incident which forever changed their lives. Dittrich had taken their dog outside right in front of the building for the last time of the night at about 12:30 a.m., when he found himself in a frightening predicament.

“I heard footsteps, and they kind of bum-rushed me from behind,” Dittrich recollected. “And I turned around, and there was a revolver in my face.”

The two suspects wanted to get inside Dittrich’s third-floor apartment, but he tried just handing over his wallet instead, hoping that would appease them. However, the $25 inside wasn’t sufficient for the suspects, who were adamant about getting in the apartment, but Dittrich desperately wanted to keep them at bay, as he knew his fiance, Duffy, was asleep inside.

Outnumbered two to one and with a gun in his face, Dittrich decided it would not be wise to try to fight them off, so he did what he felt was the only choice he had and let them inside. As they entered, he made as much noise as he could, hoping to wake his sleeping fiance and give her a heads up of the horrifying situation.

Duffy was awakened by the noise, but soon thereafter also had a gun pointed at her head as one of the men proceeded to sexual assault her.

“I could smell his breath,” Duffy later recalled after the terrifying ordeal. “It smelled like burnt plastic and very cheap alcohol,” most likely an indication that the man was using methamphetamine.

Meanwhile, Dittrich was in the next room with the second suspect continuing to make as much noise as possible.

“I thought, ‘If I make enough commotion it’s going to make him nervous, it’s going to get his attention, it might get the neighbors to call for help,’” said Dittrich, who was unaware at the time what was happening to his fiance in the next room, but could hear Duffy yelling repeatedly, “No, no, no.”

Although the commotion wasn’t enough to alert the neighbors, it was enough to grab the attention of the suspect who was assaulting Duffy, who believes that commotion made by Dittrich was the only thing which kept her from being raped that night.

“He just grabbed the back of my shirt, pulled me off of the bed, put the gun back on me, said, ‘Get your purse,’” Duffy said. “Then he told me, ‘Just dump it out.’ My phone fell face down on the couch and I remember thinking, ‘There’s my phone. It’s right there.’”

The couple knew what the other was thinking without ever saying a word. 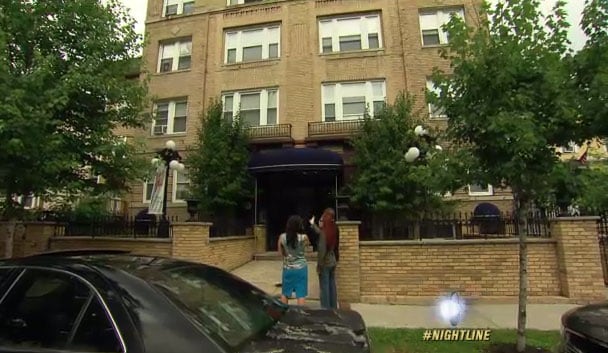 The couple says the apartment building’s security features did nothing to protect them. (Photo credit: ABC)

“So I reached up and I grabbed [the gun],” Dittrich said. “I couldn’t wrestle it free, but I knew, with both hands on it, I had control of it, and that was the opportunity that she needed to call. And I just, I really just hoped I could keep control of it for her to make that call.”

But at that point they began to viciously beat Dittrich, breaking his nose, both cheekbones and the bones surrounding one of his eye sockets.

Eventually, the suspects fled and the couple was rushed to the emergency room.

Nonetheless, the couple has made a number of changes in their lives after enduring such a nightmare. They could no longer feel comfortable in their apartment, or in the state for that matter. They picked up and moved to Youngstown, Ohio, where the couple says they feel safer.

In addition, where the couple once had an aversion to guns, they now have one in their bedroom.

“I didn’t want a gun. I specifically didn’t want one,” Dittrich said. “I was very much opposed to hav[ing] one, and I guess I got the realization that the police really can’t protect you. They can respond, and they can protect you once they get there. But, you’re on your own.”

When asked if the gun makes her feel safer, Duffy replied with an affirming, “Oh, one hundred percent.”

For the first time following the incident, the couple returned to the apartment building with the crew from ABC.

As Duffy looked around in disgust, she said, “Look, there’s the camera that did absolutely nothing. Here are the twelve lights that did nothing.”

More than a year after the incident, Duffy was called back to the city to look at a lineup of possible suspects. One of those suspect’s DNA matched that of Duffy’s attacker, who is now in custody.