SilencerCo has just announced a real first: a commercial suppressor for 12-gauge shotguns, the Salvo 12. While there have been a few options for shotguns prior to the Salvo they were limited to small boutique shops and custom jobs.

The Salvo 12 is a modular, non-concentric suppressor that can be lengthened or shortened depending on the user’s needs. The Salvo is a multi-role suppressor that’s equally suited for the millions of hunters who hit the fields every year as well as all the people who choose shotguns for home security.

With a Salvo attached, pressure levels at the shooter are in the 132-140 decibel range, depending on how it’s configured.

“The Salvo 12 represents a revolution in silencers, not just an evolution,” asserts Joshua Waldron, Chief Executive Officer for SilencerCo. “There is a huge installed base of shotgun hunters and shooters that has been waiting for a product like this for a long time, and we are proud to deliver it.” 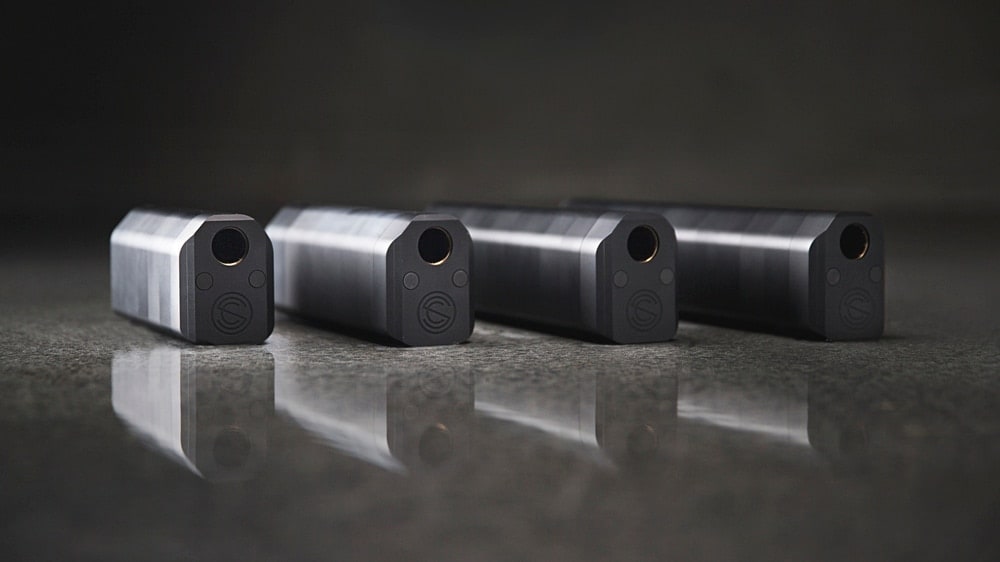 The Salvo’s modularity makes it especially appealing and unique. Clays shooters may prefer a short, light can, hunters might want a medium-length setup that gives them more flexibility when selecting hearing protection and for home defense purposes, users might want the most sound suppression possible if they ever need to use their gun indoors.

By adding or removing sections, users can assemble a suppressor ranging in length from 6 inches to 12. At its shortest the Salvo weighs 18.5 ounces and with all the stacks together it weighs 32 ounces. Choke adapters add about 2 ounces.

The modular system works by threading onto standard shotgun choke threads, and the Salvo has been tested with Remington and Mossberg shotguns as well as Benelli, Browning, FN America and Weatherby shotguns. It works with pump-action shotguns as well as gas-operated and inertia-driven shotguns.

The non-concentric design lets the majority of the suppressor hang below the bore, in front of the magazine tube. This gives users the ability to continue using their shotgun’s sights. With a traditional suppressor users would need to add some type of raised optic to see over the can.

Every Salvo has a lifetime warranty and thanks to the modular design, is completely user-serviceable. The MSRP is $1,400.

The Salvo raises the bar, proving that SilencerCo is a true leader in the world of suppressor design. SilencerCo has said they may consider other bores if there is enough demand.

For more detailed specifications head over to the Salvo 12 product page. SilencerCo has a complete listing of the can’s dimensions, weights and decibel ratings.