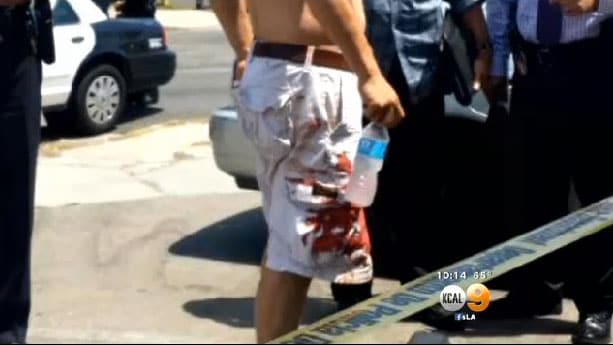 Witnesses say the store owner was covered in blood, but it wasn’t his own. (Photo credit: KCAL 9)

An attempted robbery of a convenience store Friday morning in  an El Sereno, California, ended with one suspect in police custody and another fatally shot by a bullet that was apparently intended for the store owner.

The two suspects – one armed with a gun and the other armed with a machete – walked into the store just after 11 a.m. and demanded money, local media reported. The machete-toting suspect then walked behind the counter and put the large knife to the owner’s throat while the second suspect kept his gun pointed at the owner.

Although the details of what happened next aren’t exactly clear, what is known is that a single shot fired from the suspect’s gun struck and killed his comrade after the store owner made a courageous move that likely saved his life.

“He did some karate move … he said that as soon as he heard the shot go off, he moved and it got the other guy,” said Cindy Therrien, who lives near the store and witnessed the incident.

Another witness, Rey Mesa, joked, “I guess he was like Matrix on it or something.”

There are conflicting reports whether the suspect intentionally tried to shoot the store owner or whether it was an accidental discharge that occurred during a struggle.

Authorities said several people witnessed the ordeal, but not all of them just stood back and stayed out of the way either. In fact, one woman, who did not wish to be identified, told reporters that her and her husband helped apprehend the second suspect.

“We chased after the suspect, who shot at his accomplice, and me and my husband grabbed him, and talked him into coming back into the store,” she said. “We weren’t going to let him go. I told him, ‘It’s better to just turn yourself in.’”

According to the woman, the suspect told them that robbing the store was his friend’s idea, not his, and that he just didn’t want to do it alone.

Nonetheless, the suspect was hauled off to jail and his friend was pronounced dead at the scene.

The store owner, although obviously distraught and covered in blood that wasn’t his own, only suffered minor injuries during the incident.

Authorities aren’t releasing many details at this point, but the incident remains under investigation.