Share
An Iraq War vet suffering from back injuries has been cited for keeping ducks on his property. Darin Welker, the ducks’ keeper, keeps them to fend off depression and they also give him a reason to get up and out of the house on a daily basis.

A resident of West Lafayette, Ohio, Welker has obtained a letter from the Mental Health Department of the U.S. Department of Veteran Affairs that recommends keeping the ducks. Local officials disagree.

According to a 2010 law, no people living within city limits may keep what the town considers to be farm animals, including “chickens, turkeys, ducks, live poultry or fowl of any kind, horses, ponies, cows, calves, goats, sheep, or live animals of any kind except dogs, cats, gerbils, hamsters, guinea pigs, birds or mice shall be kept in the Village.” Violating the law is a misdemeanor  offense.

Welker plans to fight the citation in court on Wednesday, where he hopes to challenge the $150 fine and keep his ducks. 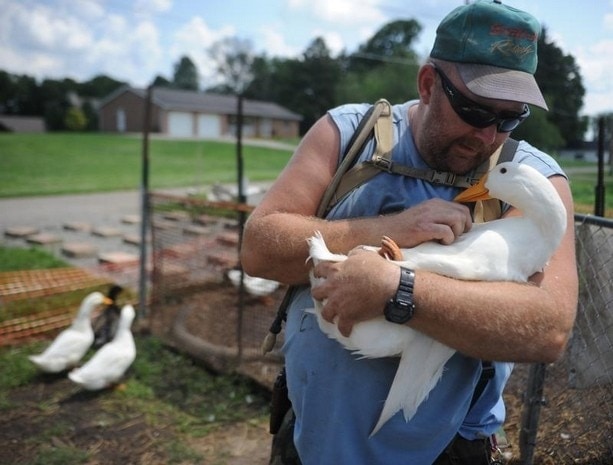 Darin Welker playing with one of his therapy ducks. (Photo credit: Trevor Jones/Tribune)

“I came back (from Iraq) with a major back injury, and between the back injury and the (post-traumatic stress disorder) that I also brought home, there were numerous problems,” Welker said to the Coshocton Tribune.

“They’re quite a relaxing animal, and they help comfort me in different situations,” Welker said while petting one of his 14 ducks. He keeps them in his back yard with a kiddie pool for them to enjoy.

“Taking care of them is both mental and physical therapy,” he said. “(Watching them) keeps you entertained for hours at a time.”

A veteran of the Army National Guard, the V.A. paid for Welker’s back surgery but not continuing physical or emotional therapy.

“(The situation) is aggravating in a lot of ways,” added Welker.

There is hope that the fine will not be enforced. Last year, another resident with a therapy animal was the target of the same law. Mary Smith, afflicted with scoliosis and mother to a wheelchair-bound daughter, bought a pot-bellied pig only to be cited for keeping livestock at home.

The Coshocton City Council went on to pass an exception for pot-bellied pigs as long as the resident sought a prescription for it, as well as setting a cap at one pig per residence.