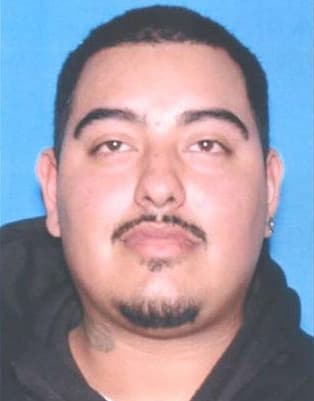 Alex Martinez, 27, was killed in the shootout and his family has spoke out against his actions.

The father of a bank robbery suspect who was fatally shot last week following a high speed chase and shootout with police, although both shocked and saddened by the events, believes officers acted appropriately given the circumstances.

Local news media reported that Alex Gregory Martinez, 27, Gilbert Renteria Jr., 30, and Jaime Ramos, 19, entered a Stockton, California, bank last Wednesday afternoon and minutes later, they emerged with three hostages who were being used as human shields. The suspects then stole a car in an attempt to evade authorities.

A high-speed chase ensued, followed by a shootout between the suspects and officers. About an hour later, when the chase and accompanying shootout finally came to an end, authorities discovered Martinez and Renteria, as well as the remaining hostage, Misty Holt-Singh, had all suffered from fatal gunshot wounds. Ramos, the only surviving suspect, was taken into custody. The other two suspects’ injuries were determined to be non life-threatening.

Investigators have yet to determine if it was bullets from the suspects or the police that claimed the life of Holt-Singh, who had just stopped at the bank briefly with her 12-year-old daughter to grab some cash for a haircut.

Following the incident, Holt-Singh’s family delivered an emotional speech wanting answers from the police, but also expressing compassion for the family of the slain suspects.

Likewise, the family of Martinez also showed concern for Holt-Singh’s family. In fact, Greg Martinez, father of Alex Martinez, told reporters that the only way he would appear on camera was if his condolences to the family of Holt-Singh were made clear.

“We’d like to send our condolences to the victim’s family. We feel for them,” Greg Martinez said, adding, “We’re so, so sorry that this happened. I wish I could take away their pain.”

Family and friends of Martizez said they were shocked to hear about the events and police said Martinez and Renteria were “documented” members of the Northern California gang known as the Nortenos. Authorities also determined Ramos was an “associate” of the same gang, although they have not concluded whether the motive behind the robbery was for personal gain or that of the gang.

Greg Martinez said his son suffered from drug addiction and was seeking money for a surgery needed for a degenerative left eye. He also said that he had believed his son was no longer involved in gang activity.

Nonetheless, as saddened as he is, the father still said that the police acted appropriately when they shot and killed his son.

“We hold no animosity or blame the Stockton Police Department for behaving the way they did,” Greg Martinez said. “We believe that given the circumstances the department behaved in a manner that was appropriate.”

Authorities believe that Martinez and Renteria may have also been responsible for an armed robbery at the same bank earlier this year.

Ramos, who appeared in court Monday, now faces charges for premeditated murder for the death of Holt-Singh and murder with special circumstances for the deaths of Martinez and Renteria, in addition to 22 counts of attempted murder of law enforcement. If convicted, he could face the death penalty.