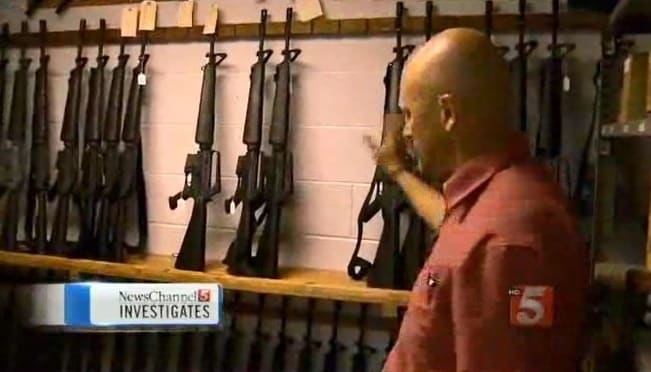 In rural McMinn County, Tennessee, Sheriff Joe Guy has achieved a more than 5 to 1 ratio of guns per officer after participating in a Department of Defense surplus program.

The guns obtained on loan through the program include 71 early-model M16 rifles and another 71 M1911A1 pistols for use by a department with just 31 sworn personnel.

“They’re here as our department grows. We’ll have additional firearms for future officers,” Guy told News Channel 5.  Guy maintains that he had asked for half the quantity of weapons received through the surplus program, but “there was a little error in the order.”

The sheriff’s office is participating in the DoD’s Law Enforcement Support Office, better known as the 1033 Program. Set up in 1997, the program, which is run by the Army, allows federal, tribal, state and local law enforcement agencies to request excess equipment from the military’s stockpiles. The items available range from vehicles and aircraft, to office equipment and weapons. To participate, agencies pay a yearly fee ranging from $400 to $1,000 based on size.

According to the program’s website, the only three surplus weapons currently up for distribution to law enforcement agencies are the M16A1 and M14 rifles, and M1911A1 pistols. However, there are limits set on how many of each a requesting agency can ask for based on how many paid and sworn personnel the department has on its roster. Currently participating organizations can request up to 100 percent of their order in both M16s and .45 pistols, and up to 50 percent in M14s.

McMinn County has a population of just over 50,000. To keep the peace, Guy’s department has 26 academy-certified officers and five detectives, which would authorize the agency for a maximum of about half its current weapon allocation.

The guns are still technically owned by the Army and the law enforcement agencies are not authorized to sell, demilitarize or destroy any weapons allocated through the program. Under the Gun Control Act of 1968, select-fire rifles such as the M16s bring with them a 10-year felony charge if they are transferred out of the agency to an unlicensed person.

Guy’s windfall mirrors that of many small departments across the country. Since its conception in 1997, the 1033 Program has transferred approximately $4.2 billion worth of military gear to U.S. law enforcement entities. This has seen departments from Florida to Utah receive not only small arms but mine-resistant armored vehicles, grenade launchers, medical gear, camera equipment, pliers, emergency blankets and various other equipment.

These transfers are drawing criticism from some who feel the line between law enforcement and the military is becoming increasingly blurred.

“What we’ve done is encourage the police to become more like the military,” said Radley Balko, an author who has been outspoken about what he sees as the increasing militarization of America’s police forces over the last several decades.

“When you surround yourself with the weapons of war, with the language of war, you’re going to be much less likely to look for ways of resolving disputes using the least amount of force possible,” Balko said.