The mysterious machine gun of Macon is up for sale 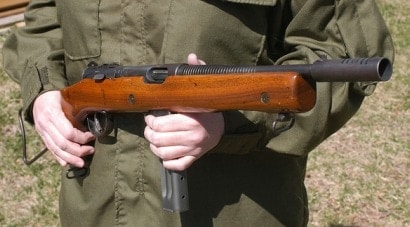 The World War II-era Reising Model 50 submachine gun is worth upwards of $6,500. A decent sum for the small town of Macon, Mississippi.

Along the Noxubee River and just east of Jackson is Macon, a rural Mississippi town of 2,400 that has its very own submachine gun of unknown origin — and it’s up for sale.

The gun, stated to be a World War II-era Reising Model 50, has been the town’s property for at least 40 years, most of those spent locked up in a safe at City Hall.

“It’s been back there forever,” Mayor Bob Boykin told the Commercial Dispatch. Now, Boykin advises, the gun is mostly just “in the way.”

Reportedly, the .45 ACP select-fire weapon has been in Macon’s inventory since at least 1967, when a former police chief remembers first seeing it.

Designed in 1940 by Eugene G. Reising, the Reising was to be a simple weapon that could be made cheaper than the then-current issue Auto Ordnance M1928A1 Thompson. While the Thompson cost $225 per gun at the time, Reising had his M50 produced under contract by shotgun maker Harrington & Richardson for just a third of that price. This brought the gun a few early contracts with the Department of the Navy which put several of them in the hands of Marines headed to combat in the Pacific during World War II.

However, the improperly tested Reising soon encountered problems in the jungle warfare of Guadalcanal and other hotspots, and the gun was withdrawn from front-line service. Of the 120,000 estimated weapons made, many were shipped to U.S. wartime allies while the bulk of the guns left in the country were transferred to the Coast Guard and various State Guard organizations. By the 1950s, these were withdrawn from service and passed on through the Office of Civil Defense to police agencies around the country, which could be how Macon acquired its gun.

Taking up space for the past several decades, the city is now entertaining bids to pass on its part of history to a Class III collector. While it is not known what state Macon’s Reising is in, these guns in good condition have gone at auction for up to $6,500.

The Macon offering is the latest in a series of towns large and small who are divesting themselves of Pre-1986 select-fire submachine guns in recent months.

In June, the St. Louis Police Department announced the pending sale of $1 million in vintage Tommy guns including some rare 1921 Colt-made variants. This came on the heels of a North Carolina county sheriff who negotiated a trade for two sub-guns acquired in the 1930s for 88 new Bushmaster rifles.

Sealed bids for the weapon are being accepted at Macon City Hall through 4 p.m. on Aug. 5. At 5:30 p.m. that day, the board of aldermen will open bids and decide to proceed with the sale or not.